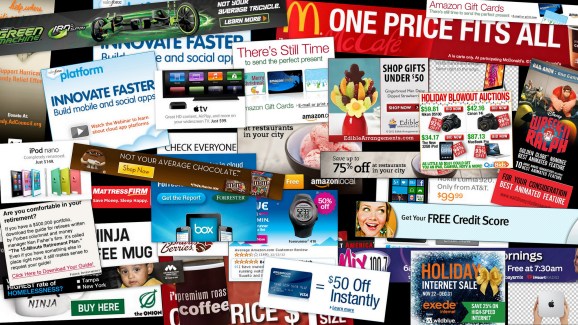 'Half an hour of web ads'

On October 27, 1994, the first online banner ad appeared, a 468 x 60 image for AT&T across the top of Wired Magazine’s HotWired site. Twenty years later, we’ve been through web 2.0, social media, and the mobile revolution — and yet the banner ad format persists.

From something the size of a bookmark on our old screens, the banner has shrunk to a tiny sliver as we play our mobile games, interact on our mobile social media apps, and use our mobile messaging.

The first banner ad was actually quite successful, with over 40% clickthrough rates. It undoubtedly benefited from plenty of attention and lacked competition for eyeballs but nonetheless showed that online advertising could work. The banner format in particular fitted quite neatly across the top of pages at the screen resolutions of the day (people had only recently started the shift from 640 x 480 to 800 x 600 pixels) and was quickly and easily digested by our image-processor brains, at some 60,000 times faster with graphics than with text.

But as mobile phones came along, the drawbacks of the banner format became apparent: They’re too small when viewed on a small screen. Which means brands can’t get creative with them. Which means users are unlikely to interact with them or even notice them. Basically, banner ads are the laziest way to port a desktop campaign to mobile and, unsurprisingly, the least effective.

It’s no surprise that Google is making this move. The mobile ad industry has for quite some time known that bigger ad formats work better, with increases of over 10x clickthrough rates (CTRs) as ads increase in size. That’s just if you’re concerned with CTRs, useful for broad comparisons across campaigns but not a great indicator of more sophisticated metrics such as engagement. However, bigger ad formats also improve engagement rates. And when you move from static to active formats, you get much more insight into what’s working, for example being able to see how far people got through a video, measuring impressions, reporting and counting, with robust processes and controls in place.

It’s at this point that brand advertisers start showing interest. As well as wanting as much insight as possible into their campaigns — so they can manage what they can measure — they also want to tell joined-up stories across all channels. This is for cost reasons, so that they can repurpose collateral from TV through to mobile, but also because the simplest message, repeated using the most compelling formats, with as little deviation as possible, is the best way to raise awareness.

So by embracing full-screen formats, Google is making it easier for brands to have joined-up awareness campaigns that work across many screens using the same content and messaging.

Back to that first ever banner ad. Blogger Dan Barker ran an intriguing test to see whether it could still perform today. And it did, with a 0.74% clickthrough rate, meaning it performed nearly 20 times more effectively than expected for the format. The reason? As the creator of the ad, Joe McCambley, says, it was part of an integrated campaign, and it offered a real brand experience. The more things change, the more they stay the same.

But if you really want your ads to work effectively on mobile, use full-screen. And don’t just take my word for it, ask Google and Facebook.

Stephen Upstone is CEO & founder of LoopMe, UK Chair of the Mobile Marketing Association, and member of the MMA EMEA Board. He has worked in mobile advertising since 2006 as Managing Director of Europe for Ad Infuse (sold to Velti) and then VP Sales and Business Development Europe for Velti after the acquisition.