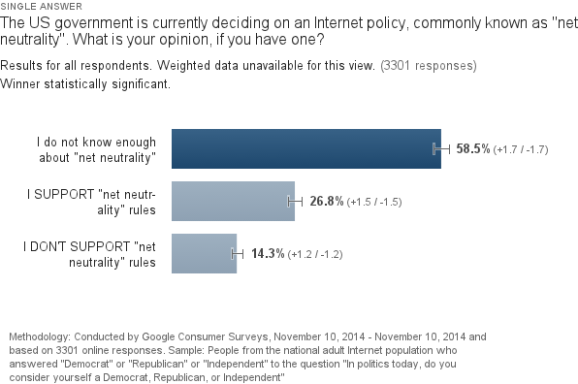 But the majority don’t appear to care. Of those who have an opinion, almost 27 percent support net neutrality, while 14 percent oppose and 58 percent have no opinion, according to a nationally representative poll of 3,300 U.S. internet users conducted by VentureBeat.

Today, Obama took a major step in supporting aggressive protection of the Internet, urging the Federal Communications Commission to regulate the Internet like a phone utility (under the so-called Title II), which would allow the agency greater legal authority to ban Internet fast lanes.

Right now, companies such as Verizon want the right to charge some websites more for a faster Internet experience, which they say helps fund the infrastructure necessary to stream bandwidth-heavy sites such as Netflix.

I conducted this poll using Google Surveys, a consumer survey tool that samples a mathematically representative selection of the United States. In the past, Google Surveys has been a reliable tool for elections and various other policy issues, including immigration reform.

For this particular poll, I only wanted survey respondents who felt comfortable having an opinion on net neutrality, since it’s a relatively unknown idea for most people. If I asked for all respondents’ opinions, I likely would have gotten a lot of responses from people who knew absolutely nothing about the policy.

So we asked: “The U.S. government is currently deciding on an Internet policy, commonly known as net neutrality. What is your opinion, if you have one?”

Most respondents didn’t have an opinion, which isn’t a surprise. When we break down the numbers by party, 36% percent of Democrats support it. Republicans tended to oppose it (20.5% vs. 15.6%) The strongest results came from male vs. female. Thirty-two percent of males supported the policy, while 16 percent opposed it. 15.8% supported it, but 74% said they did not know enough to offer an opinion.

For robustness, we also A/B tested the wording of the question, looking at whether “Internet regulation” vs. “Internet policy” affected the outcome. We thought that respondents would be more averse to supporting net neutrality if it was called “regulation,” but the results were nearly identical.

Uninformed respondents are generally very sensitive to word ordering and phrasing. So this gives us far more confidence that the poll results do reflect an informed majority’s opinion.

Stat wonks can read more about Google surveys sampling methodology here [PDF] and see the full survey here. The entire poll was conducted in a few hours earlier today, had 3,300 respondents, and has a margin of error of 1.5 percent for the full sample. The outcome was statistically significant, according to the weighted estimation of Google surveys.