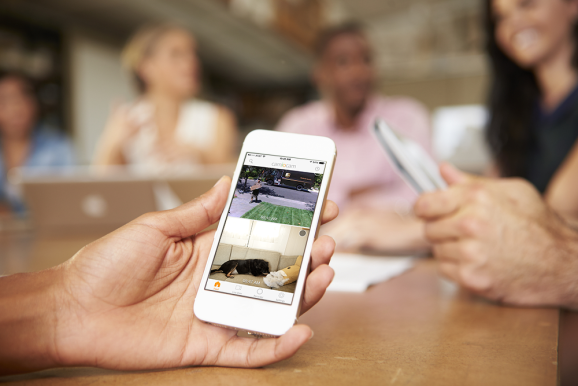 Keeping an eye on your house while you’re away doesn’t have to mean spending a lot of money on fancy cameras — or even buying cameras at all.

CamioCam, a company that turns your smartphone or tablet into a surveillance camera, is finally releasing its free iOS and Android apps publicly. Although a beta version has quietly been in the App Store for a few months, the official version is now out and with a few new features including full-video recording and playback, two-way talk, and live streaming capabilities. CamioCam also works with the Chrome and Firefox browsers, as well as with Internet-connected cameras.

To use CamioCam, all you have to do is download the app, press record, and let it do its thing. As long as the device is connected to electricity and Internet, the app will watch everything in its range and upload video footage of significant events, meaning moments when people are around or anything out of the norm is happening. That’s also saving it from recording countless hours of footage and taking up a lot of storage space on the device, or in CamioCam’s cloud-based storage service.

Besides working with the devices you already have, CamioCam’s footage is also searchable and, as mentioned, doesn’t store all of the footage the camera captures. Founder and chief executive Carter Maslan came from Google, where he helped launch Street View, and hauled into CamioCam his expertise in search. The service uses machine learning, computer vision, and keyword matching to enable users to find specific footage or elements in their video, such as “driveway, blue human, September.” This search would help you find footage of the mailman coming up and down the driveway in September.

“At Google, we did a lot of query rewriting,” such as knowing that when a person searches for “Britney lyrics,” they mean “Britney Spears lyrics,” Maslan said in an interview with VentureBeat. CamioCam’s team is applying this same type of query rewriting here, like figuring out that it’s the mailman you were searching for.

In January, CamioCam will also integrate natural language processing as well, which will will recognize the word “mailman,” for example, and know to show you footage of a blue human.

It also alerts users when there’s interesting or significant activity, such as a car pulling up in the driveway in the middle of the day when you’re normally at work. However, its technology also recognizes the difference between a car and a squirrel, as Maslan said, and won’t bother you just because one is skipping around your driveway.

On the business model side, Maslan and his team are betting on customers wanting to hook up multiple camera devices. While the apps and footage storage for using one device/camera are free, the company charges $9 per month, per device, for each additional one.