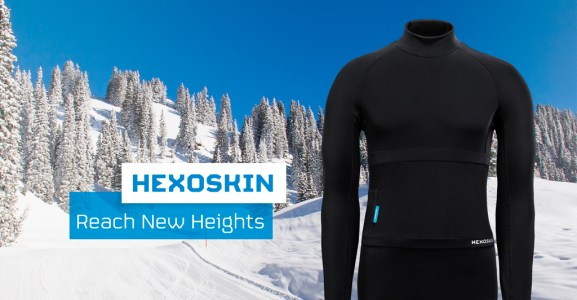 The sensors that have begun showing up on our wrists will eventually spread to clothing and accessories all over our bodies. We’re already seeing them in shoes, hats, and upper body garments. No doubt slacks and underwear are coming next.

One of the first movers in this space is Hexoskin, which already has a whole line of clothing for athletes and others who are exposed to the elements.

The company’s new garment, the Arctic Smart Shirt, uses three sensors — two just under the chest and one on the lower right side — woven into the fabric to track various biometrics.

In all the shirt collects 42,000 data points per minute, Hexoskin says. All these data points are delivered to an iOS or Android app via a small Bluetooth device that rests in the pocket of the shirt. Hexoskin believes that because the sensors are built into a shirt, they can produce measurements that fitness trackers can’t.

There may be some truth to this. The accuracy of the biometrics data collected by the sensors in wrist wearables is somewhat questionable, experts have told VentureBeat. It’s said that sensors situated against the chest can more accurately measure breathing and heartbeats.

The shirt is a black, fits close to the body (to trap heat), and has a turtleneck and long sleeves. It’s meant for cold-weather athletic training.

NASA is now using Hexoskin’s sensor clothing in a Mars simulation in Hawaii. The Canadian Space Agency has invested an unnamed amount in Hexoskin.

The Arctic Smart Shirt will be available in December and will retail for $199.