Almost two months after Truecaller nabbed $60 million to help you avoid spammers and nuisance calls, the Swedish startup has announced it has now passed the 100 million-user milestone as it unveils a handful of new “intelligent” features, kicking off today on Android followed by iOS in early 2015.

If you’re new to the platform, it can perhaps best be likened to a global crowdsourced telephone directory. When you register, you can (optionally) open your address book, including names and numbers, to the Truecaller masses. So let’s say you have “Vodafone Customer Services” in your address book; other Truecaller users who receive a call from that company — those who don’t have that number saved to their own address book already — will see that name pop up on their device should Vodafone ever call them. It draws on information from a myriad of different sources such as Yelp to help verify numbers, too.

You can also notify the broader Truecaller community whenever you receive sales or spam calls, so that others can make an informed decision on whether to answer their phones or not. You can peruse the “Top Spammers” list too, electing to permanently block unwanted calls if you so wish.

That’s Truecaller in a nutshell, at least.

When we last caught up with Truecaller in October in the wake of its gargantuan funding round, the Stockholm-headquartered company laid claim to 85 million users, so to have passed the 100 million-user mark so soon after is testament to its enormous growth spurt. That equates to well over 200,000 new users a day, which is quite remarkable for a company that doesn’t always garner the same kind of recognition as some of its fellow European startups.

That said, how the company defines “users” is key here — in Truecaller’s case, it’s using “activated installs” as its metric. So it’s counting those who have downloaded the app and created an account rather than active users — but still, 100 million accounts created is an impressive figure in anyone’s books.

Truecaller is pushing out a slew of new features as of today. One of these predicts who you’re likely to contact based on the time of day, call history, and location. So if you normally call your buddy John every Saturday while walking to the football game, “John” should feature prominently in the new “suggested” tab each Saturday. Of course, you must have the app running in the background for it to “learn” your patterns, but this should in theory become more predictive over time.

Truecaller is also looking to make it easier to get in touch with people directly from within the app, as you can now swipe left on a contact to text them, or swipe right to place a call. 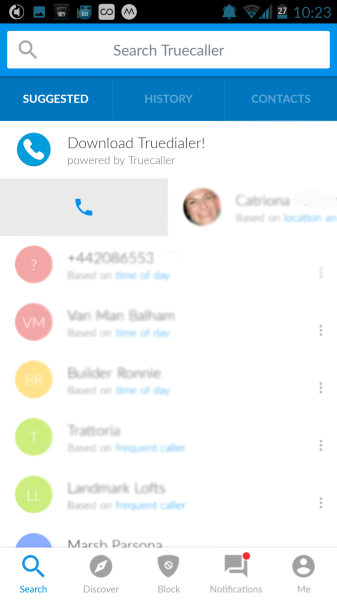 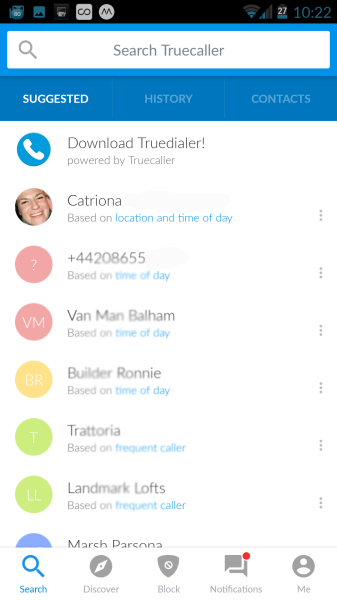 Other new features include keeping your phonebook up-to-date by reeling in data and photos from social media profiles, essentially centralizing all your contacts in one place.

This is a notable development from Truecaller. While the features are designed to add value for its existing users, it’s also geared toward keeping you inside its app as much as possible. So rather than launching directly into your main address book, telephone app, or even Facebook to garner contact information, Truecaller now wants your eyeballs every single time.

Founded in 2009, Truecaller has received more than $80 million in funding, and it’s now available for Android, iOS, Windows Phone, the Web, BlackBerry, and Nokia feature phones.