HashiCorp has largely been known among programmers as the tiny startup behind popular open-source tools like Vagrant, Packer, and Consul. But now chief executive Mitchell Hashimoto and his team are setting out to turn the company into a major dealer of software for developing, deploying, and monitoring software.

The startup today is touting a $10 million funding round. It’s not the first venture capital HashiCorp has taken on, but it does easily eclipse the $700,000 the startup brought in earlier, and it will turbocharge the startup’s activity.

Also today, the startup is unveiling a piece of closed-source software called Atlas that aggregates the Consul, Packer, Serf, Terraform, and Vagrant tools, which Hashimoto first began working on in 2009. Terraform is the newest project, having come out this past July.

“We raised this money in order to bolster our hiring in order to sell Atlas,” Hashimoto told VentureBeat in an interview.

HashiCorp has assembled the five components in such a way that they fall under three general categories: development, operations, and a runtime. Altogether, it’s possible to create development environments, build and store machine images that can be deployed on servers, and then deploy, monitor, and automatically scale applications. 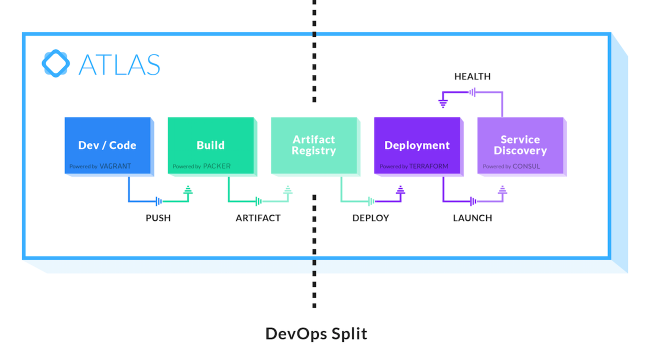 Above: A diagram of the elements comprising Atlas.

Hashicorp will sell a cloud-based version of Atlas, with a version of the software for companies’ data centers coming early next year.

Initially, business should flow from the companies that depend on HashiCorp’s open-source tools. Competition could come from companies like VMware, Hashimoto said.

San Francisco-based HashiCorp had a previous commercial product — a commercially available add-on for Vagrant that plugs in with VMware Fusion and Workstation software — but Atlas represents a much more reasonable reflection of the capabilities and focus areas of the startup.

Above: A screen shot of HashiCorp’s Atlas software.