Considering the number of companies tackling parking, SpotHero chief executive Mark Lawrence is surprisingly calm when he talks about his company.

Perhaps it’s because he’s been working on it for more than three years, or perhaps it has to do with his wholesome Midwestern values (he hails from Chicago). And that’s likely a good thing, as his company is launching its private parking space-finding app today in San Francisco, a city that already has at least three on-demand valet services and countless other parking apps.

Unlike apps like Luxe Valet, Zirx, Vatler, and the unlaunched Caarbon, which dispatch a valet to meet you wherever you’d like and wisk your car away from your care, SpotHero simply helps you find available parking in private garages and lots, book one (often for a discounted price), and pay for it right through the app. SpotHero uses dynamic pricing based on time and demand and takes a 15 percent cut from what you pay.

No blue jackets and scooters, no secret menu of extra services you can get while your car is out of your hands, just self-serve parking. And that might be the better recipe.

They just want to park their cars

SpotHero actually started as a peer-to-peer parking marketplace, enabling people to rent out their private parking spots to other residents. The goal was to make things easier for urban drivers.

“To get our first 20 individual spaces, we had to talk to them individually to convince them,” Lawrence told me over coffee last week.

One day, Lawrence approached Erik Eloe, who managed one of the garages in Chicago, about signing up the extra space for the service. At that point, the team was desperately working to get as much inventory signed up as it could, so why not talk to a parking garage?

“It was a big aha moment, because we realized that if we want to make it easier for the urban driver, we need to get garages,” Lawrence said.

This marked the beginning of SpotHero’s shift to aggregating as much private parking inventory on its network as it could and to offering competitive or lower prices by selling a garage’s surplus. Instead of brokering people’s individual private parking spaces, it would grab spaces by the dozens, even hundreds per garage.

“When you have one side of the marketplace solved, where you put the cars, then you can focus on the other side,” that is, getting customers who need to park, Lawrence said.

Currently, most of its locations still have attendants who manually check off SpotHero spots when a customer comes in, but about 25 percent have the technology necessary to fully integrate with SpotHero’s backend and let customers simply scan a barcode on their phones at the gates. The latter is what Lawrence says the company is working towards increasing, largely by eventually showing garage and lot owners that investing in technology will mean more revenue.

“We have data to prove it. Once you add the scanner, repeat use goes up,” he said.

SpotHero still has some technological conveniences to work out even though its app already does a lot. Still the startup is quite well positioned to give the on-demand valet apps a run for their money — because in the end, it has inventory.

SpotHero is already partnering with the five largest parking garage companies in the country, and after launching in 11 cities before San Francisco, it’s safe to say it’s gotten the system down. As it launches today, it already has 55 locations (garages and lots), covering SoMA, the Mission District, the Financial District, Nob Hill, and the Union Square area. It will be adding new locations almost every week, Lawrence said. 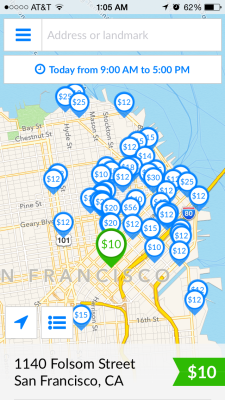 And unlike valet services, it doesn’t have to worry about the labor costs or even scaling its labor force. Instead, it’s been adding a few valet services to its inventory, which users book as they would a parking spot.

“I believe that on-demand valet can be a feature of our product if we’d like to. Just like Uber has Uberx and Uber [black car], we can have SpotHero and valet,” Lawrence said.

Lawrence has been looking into and experimenting with virtual valet stands, which are temporary valet spots the company could set up as a way to extend its convenience in areas with no garages, or if it’s popular in a particular part of town.

But all of that is flexible, he said.