At least one content engagement company has set its sights on clickbait.

Clickbait is content that uses some sensational attractor — a provocative headline, for instance, or a photo of a woman in a bikini — to bait users into clicking. It is not uncommon for readers to be disappointed with the resulting content, thus generating the opposite of reader engagement.

Today, San Francisco-based InPowered is launching version 2.0 of its platform, which premiered in April.

And it’s also announcing a new pricing model that it says makes it the “first and only platform that charges advertisers based on the consumer’s actual engagement with their content.” In other words, a volley across the bow of clickbait.

The company specializes in “native ads,” brand-related content that resembles a site’s content but, usually, is labeled in some way that indicates it is not pure editorial.

InPowered’s native ads showcase posts by “experts” around the Web about the client’s brand. For instance, InPowered might distribute as native ads some posts about a new Samsung phone by someone who writes regularly about smartphones, in a campaign for that company.

To be considered an expert by InPowered, someone would have to write at least five posts on a given topic over 90 days, and the posts would need to be widely shared. 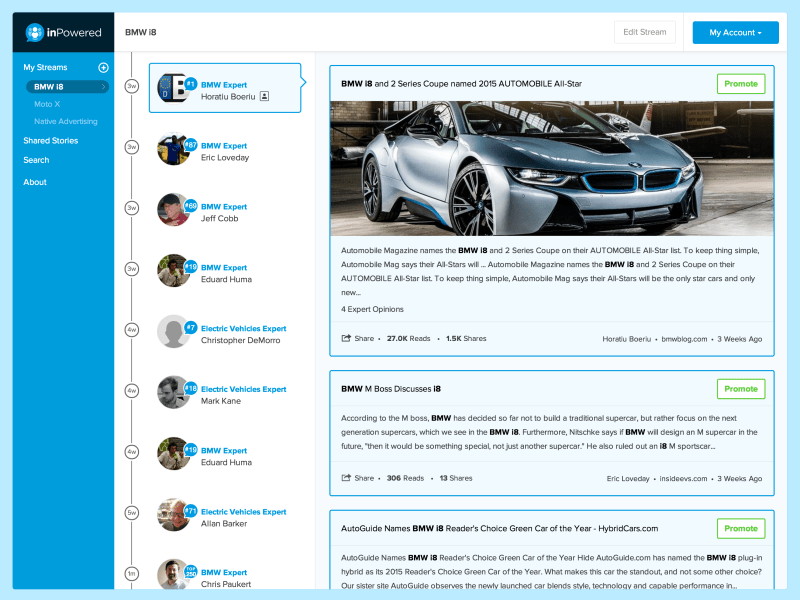 Above: A screen from InPowered 2.0, showing possible experts

The brand wants people to read and share the posts — that is, become engaged with them. Thus, InPowered’s charges will now no longer be based on clicks, but on cost-per-engagement.

It will look at each native ad’s engagement, as measured by the amount of time a user spent on the page — assumedly reading the post — and the amount of sharing.

Marketers “are buying native ads and getting clicks, but they’re not getting results,” Nilfouroush said. “It’s different from traditional advertising, [and] we’re incentivizing marketers to promote good-quality content.”

You would think, then, that InPowered would charge marketers more for native ads with higher engagement.

The company will be charging less for content that is highly engaging, because, they say, their costs are less.

“If the content is more engaging, it costs us less to get someone engaged,” Nilfouroush told us. “You’re not paying for more time spent on the page, or the shares.”

In addition to its new pricing model, InPowered 2.0 is oriented toward content discovery, as opposed to a previous focus on searching for expert content. There are also such new capabilities as showing how expert content would look as a native ad or as a shared post on Facebook.

“Everybody likes Outbrain, Taboola, [since they do] native ad at scale,” Nilfouroush said, but “they’re clickbait people, doing everything to get you to click but [delivering] very little value to the marketer.”

“There are many people who promote content, [and] we don’t consider them direct competitors,” he added. “We’re the only platform that delivers engagement [that has value] for a brand.”