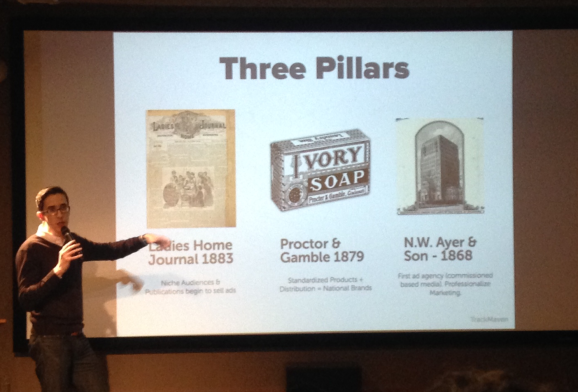 What kinds of marketing tips do a VC firm’s startups share?

Bowery Capital hosted in Manhattan its second annual CMO [chief marketing officer] Summit on Thursday to find out. It brought together nearly a dozen companies in its portfolio — including marketing analytics firm TrackMaven, training platform Codecademy, and mobile data platform MParticle — along with related vendors and invited guests.

Margaret Molloy, the CMO and head of business development at branding agency Siegel + Gale, noted in a panel on “How Big Brand CMOs Work with Startups” that startups should be aware of another new trend among CMOs: They’re learning to code.

“It’s the new lingua franca,” she said, with some CMOs apparently trying to get a better handle of how to simplify their businesses.

When talking with enterprises, she also advised that startups shouldn’t “have too much religion about what you call [your technology].”

Startups need to be flexible in how they describe what problems their tech solves, Molloy noted. “Sometimes your tech is so visionary, it’s ahead of the budget [because] there’s no budget item for it.”

Allen Gannett, the CEO and founder of Bowery Capital-backed marketing analytics firm TrackMaven, advised that it’s best to think of modern digital customers as hummingbirds, visiting many flowers (sources of information) in their journey. The analogy sorta worked in his presentation on the history of multichannel marketing.

“The [sales] funnel is under attack,” he added, noting an oft-cited stat that self-informing B2B buyers are, on average, 57 percent toward their purchase decision before they even engage with a salesperson.

He said that countering strategies should include marketing that is channel-specific, an “always-on” rapid-response approach, understanding that “data-driven marketing will win out,” and maintaining a commitment to win “the attention war.”

What not to do

Kipp Bodnar, the VP of marketing at inbound marketer HubSpot, presented a smorgasbord of tips from his company’s history — mostly of things not to do.

In its early days, he said, his company created a very successful Website Grader that evaluated a site’s marketing effectiveness, and then, wanting to mine the same vein, followed it up with a more complete Marketing Grader and others. While the initial product was a hit, the others offered “too much information,” he said.

The lesson, he said, is that if you create “a successful, free tool [to] solve a prospect’s painpoint,” don’t layer on more tools of the same type unless they also are pinpointed directly at a problem’s solution.

He advised that startups invest in building blog subscribers — especially email subscribers — as a way to build a permanent fanbase.

Bodnar also shared two tips that go against the tide of much marketing advice:

And Namely CEO and founder Matt Straz recounted how he “did everything the opposite of what VCs tell you to do” as he discovered ways to boost the brand recognition of his fledging HR/payroll software company on a modest budget.

‘No such thing as too small’

Instead of focusing primarily on digital environments, his company ventured into the real world outside the door of his New York City offices. His team created large, colorful posters with a simple message that adorned dozens of bus stop shelters, Metro North railroad stations, and taxi roofs. They also showcased at industry events.

When Namely conducted online content marketing, Straz pointed out that the key was finding an agency that could help with the right placement.

And, in a fitting closing comment, he brightened the prospects of early-stage startups everywhere.

“There’s no such thing as being too small to create brand awareness,” he said. One ad agency showed him research, Straz said, that response rates for direct marketing corresponded almost exactly with brand awareness in a given market.

In fact, the ex-ad exec said, small startups living on seed money or even Series A “can get better pricing from ad agencies.”

The agencies know we don’t have much money yet, he said, but “they want us to use their tools” so we will keep doing so when we’re loaded up with later rounds.