NEW YORK — Startups in the San Francisco Bay Area receive heaps of attention for their technological developments, partly helped by hefty funding rounds from prominent local venture capitalists. But as far as Jon Lehr is concerned, if startups aspire to sell their technology to big companies, they would do well to consider a little city called New York.

Lehr, a cofounder of the year-long enterprise tech startup accelerator Work-Bench and the head of Work-Bench’s venture arm, can’t help but point to the many major companies in financial services, media, and other industries that call New York home. You know, enterprises. Enterprises can yield helpful feedback and, if startups are lucky, some serious revenue.

See, Lehr once worked on the technology business development team at Morgan Stanley, where he saw first-hand how a financial-services giant like that ends up shelling out for technology. Any prospective vendor had to come to New York to kiss the ring.

“You can’t do it remote in the enterprise,” Lehr told VentureBeat in a recent interview at the Work-Bench office. “My point is, if you want to be successful, then you need to come here. You don’t have to have a whole presence, but you need to be here to sell.” 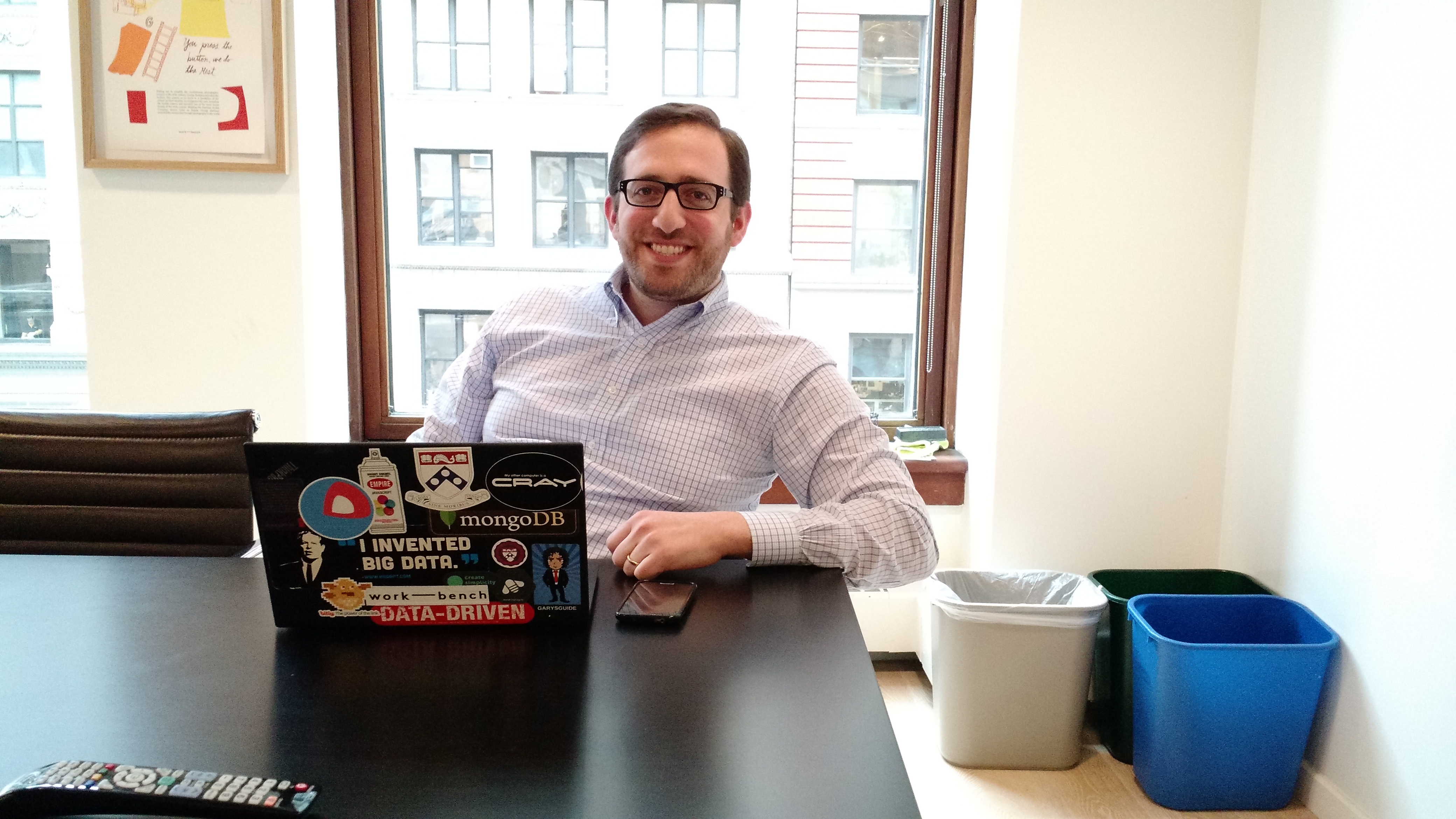 Above: Jon Lehr, a cofounder of Work-Bench and its venture director, at Work-Bench in New York on Dec. 11.

In a sense, Work-Bench lies within the realm of accelerators catering to enterprise startups, like Acceleprise and the Alchemist Accelerator.

But Work-Bench is different from such accelerators in at least one important way: It doesn’t hold demo days during which investors watch pitches from trained entrepreneurs. Instead, it trots entrepreneurs out before potential IT buyers and customers. And rather than allocate space to an entrepreneur-in-residence like some venture firms, Work-Bench has brought in Merck as the accelerator’s first “enterprise-in-residence,” whereby the pharmaceutical multi-national’s head of innovation met with and told startups what they need to know, Lehr said.

Meanwhile, Work-Bench’s venture division invests $250,000-$1 million in startups, meaning that it contends with several other firms that like backing enterprise startups.

But locating 1-year-old Work-Bench solely in the context of enterprise-focused accelerators and investors would ignore the greater role it can play. With its knack for hosting enterprise-tech-related events and its ability to connect startups with IT buyers in the area, Work-Bench could become a sort of landmark for New York as a resurgent tech hub. Several Silicon Valley venture firms now maintain New York outposts. The city is also headquarters for an increasing number of attention-getting tech startups, like DigitalOcean, Kickstarter, MongoDB, and Trello, as well as a few early-stage startups specializing in the trendy domain of data analysis, like Mortar Data, SiSense, and Yhat. Sure, it’s no San Francisco, but at this point New York can’t be ignored.

Lehr appreciates even partial wins. Look at CoreOS, a startup with an operating system for servers in company data centers. CoreOS itself is based in San Francisco’s Mission District, but multiple CoreOS engineers and salespeople spend their days at Work-Bench’s space near Manhattan’s Union Square.

Over time, though, Lehr believes that more and more founders will start companies in New York.

“That’s why we have Work-Bench here,” he said, “to be that physical home base.”