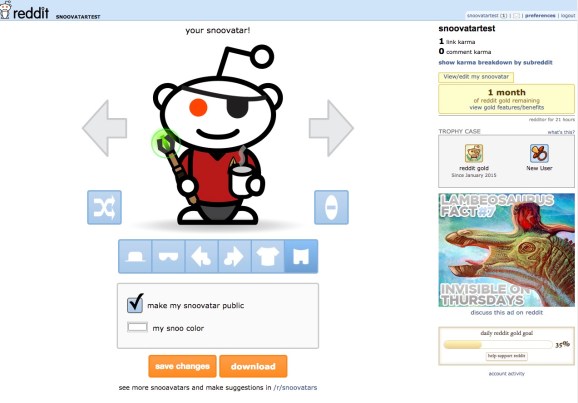 Reddit is rolling out a new perk for those who subscribe to the community news sharing site’s Reddit Gold program, as well as adding two new features available to all users, the company announced today. 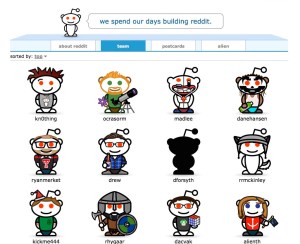 Above: A collection of Snoo avatars for each of Reddit’s employees.

The custom avatar perk, which Reddit has affectionately dubbed “Snoovatars,” is a pretty simple tool that lets you make a custom version of the company’s alien mascot Snoo. Over the years, many users have designed their own version of Snoo for various subreddits (aka category pages), and every Reddit employee gets their own version when they join the company. Now that functionality is available to Gold users, which I’m guessing will be pretty popular among Redditors.

I had a chance to play with the Snoovatar creator, and it actually has quite a few options to make it your own, including various references to superheroes (Wolverine’s mask), Doctor Who (a sonic screwdriver), Star Trek (communicator), and more. After you’re finished toying with the design, you can then choose to make it publicly available or share it via a new Snoovatar subreddit.

But that isn’t the only thing rolling out today. Reddit is also making two popular Reddit Gold features available to all its users. Reddit Gold was initially launched as a way for the company to bring in more revenue to build new features into the site, which it would allow those who paid to test out before the rest of the community. That said, as of today all Reddit users will now receive notifications whenever someone links to their Reddit profile within comment threads. Also, Reddit is now letting anyone send an anonymous reply when another user “gilds” you with a month of Reddit Gold (priced at $4) for making a popular comment or submission to the site (although you don’t need a reason to buy the gift of Reddit Gold for someone).

These are pretty big features in terms of making Reddit’s community more socially aware within a lively discussion, and it also might help increase the amount of revenue Reddit is able to generate through Gold subscriptions. Personally, I would go weeks before perking up to a discussion involving myself (or something related to links I submitted) before the user notification feature launched, despite visiting the site as a passive consumer of content on a daily basis. The chances of me gifting someone Gold for a cool submission or comment diminishes greatly if the discussion is older than a day, so timeliness of notification is valuable.