As the calendar flipped to 2015, the trend of mobile tech also turned eight years old. Though that might seem mature in today’s age of rapid technological advancement, we forget that the PC was the primary consumer device for 26 years (1981-2007). Placed in that context, mobile seems young, very young in fact — with momentum that seems unabated year after year, as demonstrated by Google Trends data.

That said, when it comes to mobile (and though it seems obvious), we believe there is room to run as the device captures more and more of our attention and plays a more central part in our daily lives.

The thesis that mobile will remain the top theme, with room to expand even further, is a view that has slowly become conventional wisdom that is best summarized by tech-focused venture capitalist and analyst Benedict Evans:

We are now well on our way to having some 3.5bn to 4bn people on earth with a smartphone – there are probably 2bn today…  For the first time ever, the tech industry is selling not just to big corporations or middle-class families but to four fifths of all the adults on earth – it is selling to people who don’t have mains electricity or running water and substitute spending on cigarettes for mobile… So there will be something like 5 times more smartphones than consumer PCs and those devices are always with you and, with all their apps and sensors, are much more sophisticated than PCs ever were, seen as internet devices.

Mobile still has room to grow (possibly twice as much, from a devices sold perspective), but what makes the years to come so different is that it’s more about the proliferation of “mobile as a hub” rather than what we have seen over the last eight years. Emerging ideas and themes — such as Internet of Things (IoT), wearables and payments — all stem from a mobile device always being turned on and available on our person, no matter where we go.

Both public companies and investors seem to agree with the view that mobile remains the place to be in the years to come. The largest technology companies in the world have been busy over the last year growing their “mobile as a hub” exposure. Highlighting this, in 2014 alone there were over $11 billion worth of notable acquisitions by large cap tech players in the subsets of connected home, connected automobile and wearables. 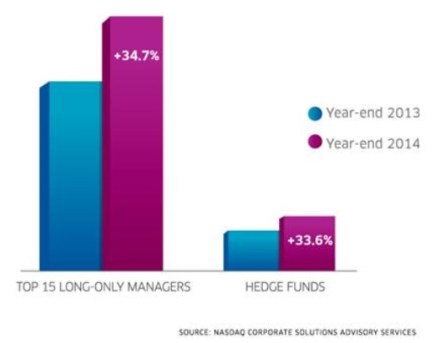 Above: Exhibit 1: Institutional capital is extremely more bullish on mobile than one-year ago.

In analyzing a crop of mobile-specific tech companies (that spans across hardware, semiconductor, software, social network, advertising, and analytics players) from the public investor side, we uncovered that the world’s largest money-managers are also positioned for the mobile revolution to continue. As evidenced by the table above, the world’s top 15 long-only investment managers ranked by assets under management (AUM) have allocated 34.7 percent more capital to the mobile theme over the last year. Additionally, the hedge fund community is just as bullish as their long-only counterparts, as seen by a whopping 33.6 percent increase in capital allocated to the mobile basket.

Furthermore (as seen below in the second table), top long-only managers typically known for sector and asset diversification are betting on the mobile trend to continue — exhibited by an average 5.0 percent of their assets allocated to the trend. In some cases, close to 7.0 percent of a manager’s portfolios (Fidelity Management and Columbia Management) are allocated to the mobile basket — with others increasingly more bullish on mobile over the last year. For instance, Wellington Management has allocated an outsized 82 percent more capital to the mobile basket year-over-year.

Returning to the idea that tech (and more specifically mobile) is now selling to 80 percent of the 7 billion humans on earth, the sheer size of the addressable mobile market is something that previous technologies could not comprehend. Clearly it’s a game changer. Though what is exciting to us, and appears to be exciting to investors as well, is how the trend evolves. While we are eight-years into mobile, it, counter-intuitively, may be just starting.

Above: Exhibit 2: Top long-long managers have grown mobile assets up to 80% year-over-year.

Looking ahead, 2015 and beyond will likely be years of expansion to mobile as the hub, a position that the PC held for many years. Clearly, like investors, companies are expanding their mobile presence, a trend we do not see abating anytime soon. And with that in mind, 2015 will likely look similar to 2014 in that mobile will continue to dominate, though we can expect mobile to represent much more than it previously has, in new life-changing ways. Get ready, for a Jetsons-like world.