The taxi industry may end up disrupting itself before Uber can compete it out of existence. This week, a handful of large cab companies in Broward County, Florida, demanded the right to be free of county fees, limits on picking up airport passengers, metered pricing, and wheel-chair accessibility quotes.

That is, as the Sun-Sentinel smartly observed, “they want to be like Uber,” which doesn’t abide by any of those regulations.

“Clearly, neither Uber nor Lyft have any intention of following the ordinance and complying with the Board’s Cease and Desist Letter,” a group of Taxi companies wrote to the mayor, referring to county orders against the two popular ridesharing companies. “The industry members signing this letter respectfully request relief from the following regulation governing their businesses if the illegal activity is allowed to continue.”

In other areas of the country, taxis have taken a massive hit. Last September, the San Francisco Municipal Transportation Agency estimated that taxis have seen a 65% decline since ride-sharing startups took root. 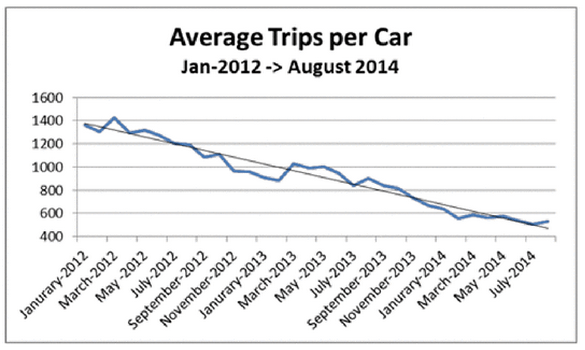 Ditching meters and lax pickup laws may not be enough to sustain the taxi industry. Uber recently released stats that show changing expectations among its riders. The longer Uber exists in a city, the less tolerance riders have for wait times. In some cities, if users see the nearest Uber is more than even 2-3 minutes away, they are far less likely to request a car,” explains the data team in a company blog post.

Taxis simply cannot compete with that kind of service with their current supply. A major role that taxi laws play is regulating the number of cabs on the street to reduce competition between drivers. But that means there are fewer taxis encircling every potential customer. So they’ll likely have to give up that regulation in order to compete.

Broward taxis are making a smart move in the face of increased competition, but if they have to keep changing to succeed, eventually they may not look like taxis at all anymore. And that’s how Uber could win.