There’s no need for drones flown by inexperienced pilots to crash into trees or buildings. Not, says Silicon Valley’s Skydio, if they’re using the startup’s new camera-vision-based navigation software.

Today, Menlo Park, Calif.-based Skydio, a company led by MIT graduates and alumni of Google X, came out of stealth mode, announcing $3 million in seed funding from Andreessen Horowitz and Accel Partners. It also unveiled its navigation platform, which it says allows drones to autonomously navigate their way around obstacles. 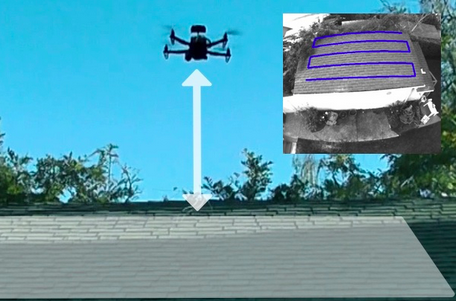 Above: Skydio’s technology is meant to allow drones to safely fly much closer to structures than is generally possible with GPS-based navigation systems.

The applications are myriad, Skydio CEO Adam Bry told VentureBeat this week. But two areas the company is focusing on in its early days are making it possible for drones to autonomously fly inspection runs over, say, construction sites, and letting skiers launch a drone that can film them while they plow down a mountainside.

One of the post-Christmas narratives last month was tales of people who unwrapped, and then quickly crashed their brand-new drones. But Skydio thinks such poor flying is unnecessary if the drones can see and automatically analyze the nearby terrain. And that’s what its platform was designed to do, Bry explained.

Some of today’s most popular drone systems, including those from DJI or 3D Robotics, rely either on users’ manual piloting or on GPS to navigate from point A to point B. Skydio’s navigation system takes another approach, using proprietary algorithms to build a 3D map of a drone’s surroundings by analyzing real-time data coming in from a series of on-board cameras.

That data is meant to navigate the drone around obstacles, even as it flies much closer to them than GPS-based systems allow. After all, Bry suggested, just because a drone knows its GPS coordinates doesn’t mean it knows what’s in its way as it flies towards an endpoint.

Skydio isn’t sure how long it will take to get its software ready for the market, but VentureBeat had a chance to watch a drone powered by the company’s technology in action. The drone successfully flew an autonomous route, albeit a simple one over flat ground, based only on what the commodity cameras and sensors installed on it could see.

The startup has also developed a control system meant to allow drone owners to fly them using intuitive gestures with a mobile device rather than having to manipulate a joystick. In the live demo VentureBeat took part in, that system worked as advertised, with the drone being flown up or down, left or right, simply by moving a mobile phone in those directions. The goal, as the company notes on its Web site, is to let a drone owner “be a cinematographer, not a pilot.”

Skydio knows that it has a lot of technology problems to solve before it is ready for prime time, and Bry said it’s not entirely clear what the business model is. But it seems likely the company will want to license its software to hardware makers.

If it succeeds, Skydio’s technology could go a long way towards overcoming one of the drone industry’s biggest problems: safety. If commercial operators or individual pilots can count on putting their flying camera in the air without worrying about crashing, it could open up a nearly endless range of possibilities for how the devices can be used. That’s clearly the hope of Skydio’s investors, who see the potential for upending one of the most exciting new industries around.