Jumping on the bicycle, I was told to watch out: As soon I started to pedal, it would feel like I’d been pushed forward by a big gust of wind. So don’t be surprised, they said.

Good advice. While it maybe wasn’t quite like the wind, it was true — the bike, powered by the new removable “smart” wheel from FlyKly, took off with just the slightest pedaling, accelerating much faster than it would have if it had just been under my own power.

FlyKly has been in the works for a while. Originally a Kickstarter project that raised $700,000 (its goal had been $100,000), the electric bike wheel project is now available to everyone. And I was one of the first people to get my (feet) on it.

Electric bicycles are nothing new. But FlyKly’s approach is different — use your own bike, the company says, and just buy our wheel. That’s an attractive proposition if you’ve got a bike you love but want a little electrical propellant to get you where you’re going without building up a sweat.

That’s actually part of FlyKly’s origin story, according to Niko Klansek, the Slovenian founder and CEO of the New York-based company. Back in the day, he had moved to New York and found himself riding all over the city to business meetings, usually arriving drenched in sweat. With FlyKly, he told me, channeling his inner pitchman, you can take your bike to work and not get sweaty or tired. “Dress for the destination,” he said. “Not for the ride.” 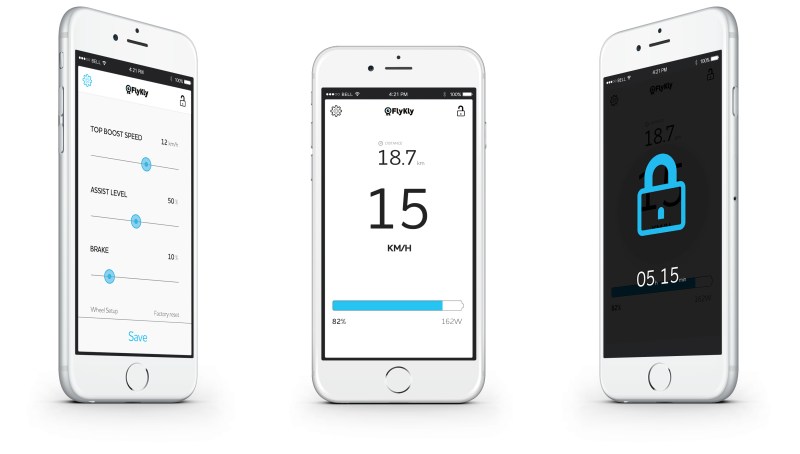 The company’s not the first to try the removable electric wheel, with a similar approach in the works with the Copenhagen Wheel. But FlyKly is first to market, Klansek said.

Lest you wonder, the FlyKly system is not meant to provide every bit of forward motion as you ride. That’s called a motorcycle. Rather, this is “pedal-assist,” Klansek said. That means that once you start pedaling, the motor turns on and boosts your acceleration, but you still have to, you know, pedal.

The obvious questions are about battery life and power boost. Klansek explained that a fully charged battery should deliver up to 60 miles on a single charge if you maximize the system’s settings (though the FlyKly app, naturally) and pedal backwards as you go, which both brakes and recharges the battery a bit. With no tinkering of the settings, and no backwards pedaling, you’d get about 30 miles, he said.

And fear not: If the battery dies, the wheel works just as a normal bike wheel does, albeit one that weighs six extra pounds.

What about uphill? Although I didn’t get to try the bike on a hill, Klansek assured me the system works on inclines, essentially making it feel like normal bike riding on flat ground. And riding on flat ground? I have to admit, it was pretty fun. And it felt odd, especially at first, to get so much out of every rotation.

FlyKly’s app is about data, and changing settings. It shows you distance, speed, and battery life, as well as how many watts of power you’re generating when pedaling backwards. And it lets you tweak things like how much of a boost the hub provides, how strong the braking is, and the top speed at which the system works. Above 16 miles an hour, Klansek said, the system turns off due to legal restrictions on electric bikes, and you’re on your own.

And don’t worry: FlyKly’s not just a smart wheel company. It’s also selling a smart light, a little contraption that straps onto your handlebars and holds your phone while you recharge it by pedaling. The light runs $79.