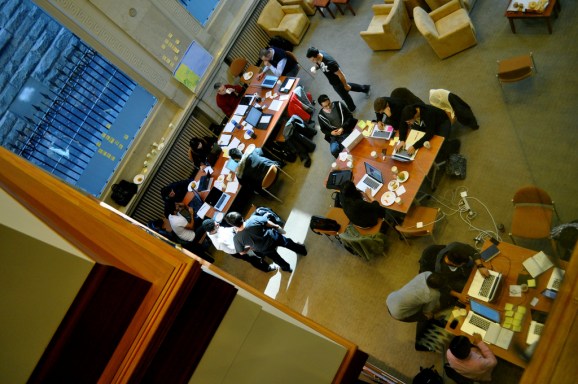 In a guest post on VentureBeat last week, Chris Lynch of Atlas Venture wrote, “If you’re stupid enough to sign on with one of these guys [accelerators], you might not deserve to be in business in the first place.”

Ouch! I resemble that remark!

I’m a first-time chief executive and a cofounder of LaunchDarkly, and my Alchemist Accelerator demo day is actually happening today.

“Publicly available research suggests that fewer than 2.5 percent of entrepreneurs make at least $5M in companies that took the accelerator route,” he wrote. “… How many liquidity events, IPOs, acquisitions, or growing cash flow positive companies were born from accelerators outside of Y Combinator?”

I wake up every day to the statistical likelihood that we will fail. I started LaunchDarkly because I love creating delightful products in new, game-changing categories. I’ve worked at three startups, most recently at TripIt, which Concur acquired for $120 million, a successful exit. I started the TripIt for Business unit by doing customer interviews, validation of product/market fit, positioning and messaging, operational plan, competitive positioning, and sales. I was the first full-time product manager at EasyBloom, a “Fitbit for plants” startup; sold for less than the invested money. At EasyBloom, I took the product from initial private beta to more than $1 million in revenue. I have three deployment patents from Epicentric, an enterprise portal management company; sold for less than the invested money. My cofounder, John Kodumal, as development manager built Atlassian Marketplace into a multimillion-dollar platform. These are the skills that Lynch cites as key for startup success. But I know that in startups, even with all the right skills, success is not guaranteed.

Given that most startups fail, John urged us to get every edge we could to succeed. When I wanted to finish a 100-mile trail race, I got a living-legend coach, Ann Trason, who holds the world record for 100 miles. We knew how to start, build and scale a successful product and business unit, but we wanted help with starting a company. The right accelerator seemed to give us a similar edge to having a record holder as a coach. I still did the hard work of training for and running 100 miles, just like John and I are doing the hard work of starting LaunchDarkly, but why not have a world-class accelerator to help us?

For the record, 50 percent of Alchemist Accelerator’s graduates close institutional investors or significant seeds within 12 months of demo day, with an average valuation of $8.6 million.

Lynch’s second point is that accelerators are not worth the equity, given the short time frame, the risk of not getting promised mentors, and the emphasis on raising money instead of product development. Here’s where I agree with Lynch: not all accelerators are the same, and not all are worth it. Going to “Fly-by-Night-academy-diploma-mill” is not the same as going to a top-flight school. Just like anyone can print a business card saying “CEO”, anyone can call themselves an “accelerator” or “seed fund”. In fact, there’s more accreditation for nail technicians than for any of these titles! I’ve heard stories of managing directors who are more interested in their personal brand than helping companies succeed; “pump and dump” situations, in which accelerators pressure companies to have vanity metrics instead of building a business; corporate accelerators that turned out to have no investment vehicle to actually invest in their graduates; and accelerators that promise funding connections that don’t materialize.

Be thoughtful about what you’re getting from an accelerator and what you’re giving up in return. Treat it like choosing a college — are you a big-school or small-school person? Are you hardware or software, education technology, or e-commerce? What gaps in your team will an accelerator help with? Are the promised mentors actually accessible or like the Nobel Prize-winning faculty that as an undergrad you’ll never actually meet? Does the thought of moving to a new city and sharing a bunk bed with your cofounder fill you with excitement or dread? And, most importantly, do you actually need to go to college, or are there other routes to success for you? For Alchemist, there were both tangible and intangible benefits; almost all startups are poor in time and money — and very equity-rich.

With Alchemist, we got direct investment, free cloud services, inexpensive office space, and deferred legal and accounting fees, at a total value of $100,000. With this support, we were able to find LaunchDarkly a home, hire an engineer and a designer, and pay for several months of our cloud-computing costs. Alchemist is a six-month program, during which we went from having no product to having private beta customers.

Sure, we’ll have to pay the deferred fees eventually, but cash is king at a startup. I’ve heard of other startups negotiating with other service providers for free or deferred fees. But instead of spending our time badgering firms with hopes of someone taking us on, we could focus on customer development and building a product.

With Alchemist, we were matched with industry-leading founders for our coach for the program. We hit a home run with Sean Byrnes, co-founder and former chief executive of Flurry. His help and mentorship have been invaluable, and he’ll be a LaunchDarkly advisor after Alchemist.

I’d started successful business units, and I’d grown startups to millions of dollars in revenue, but I’d never raised money for myself. TripIt cofounder Scott Hintz’s advice to me was, “Just ask your VC associate friends if you can practice your pitch on them.” But I didn’t have a single VC associate friend. Through Alchemist, I now have VC friends, and they coached me on how to frame my business in VC terms. And LaunchDarkly raised more than $500,000 before our demo day.

Dan Shapiro, who has been chief executive of three successful startups, told me to find a cohort of people going through the same startup roller coaster for a sounding board and sanity check. All I know about Lynch comes from his public posts and his LinkedIn profile, but it doesn’t seem like he’s ever started a company from the fun but painful beginning. With Alchemist, I have a cohort of 12 other amazing startups from all over the world, including Estonia, India, and Canada. The cohorts overlap, so in the batch below me, I’ve met British, Lithuanian, and Chilean companies. Every Thursday, the accelerator has a gathering where an industry expert speaks, and we chief executives share our own struggles and experiences. For a startup chief executive dealing with the extreme cycles of startup life, it’s invaluable to have startup friends who understand.

So how much is all this mentoring, fundraising, and networking worth? Unquantifiable. And I think this is what Lynch missed when he wrote, “You’re giving up too much equity.” Most venture-funded startups are an all-or-nothing endeavor. If LaunchDarkly doesn’t succeed, the equity we gave up is worth absolutely nothing. If we do succeed, then and only then can we second-guess whether we gave up too much. But that’s a first-class problem to have.

Isaac Newton advanced the scientific method in his search to turn base metal into gold. He never succeeded, but he had tools and a framework to judge his success. In my time as a lean startup advocate, I’ve been asked if the Lean Startup methodology can guarantee success. Nothing can guarantee success, but lean startup methodology can give you a framework to quickly gauge whether or not you are succeeding. Similarly, an accelerator won’t turn a bad company into a good company, but it can help a good company succeed more quickly and efficiently.

Edith Harbaugh is a cofounder and chief executive of LaunchDarkly.