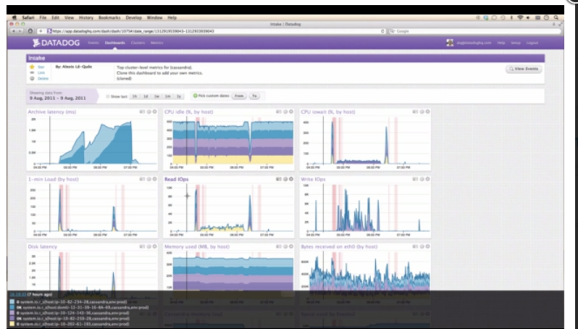 Datadog, a company that helps monitor cloud applications, has raised $31 million in a Series C round.

Datadog’s service gives developers and operations teams the ability to monitor performance metrics, as well as specific events, from a variety of cloud services, all in a single dashboard. It’s free for up to five hosts and costs $15 per host per month for up to 100 hosts, with enterprise pricing available for quantities above that.

The round was led by previous investor Index Ventures, with participation from RTP Ventures, Openview Partners, and others.

The company is based in New York, and launched in 2010. It says that its monitoring service works with thousands of customer companies, comprising more than 100,000 servers in all.

It supports most major cloud providers, including Amazon Web Services (AWS), Microsoft Azure, Google Cloud Platform, and Red Hat OpenShift, as well as the OpenStack platform. The company says its monitoring service works with more than 100 different types of technologies used on these cloud platforms.