A number of analytical tools help companies find people who are most likely to become customers. But the problem, according to CEO Anil Kaul of the analytics firm Absolutdata, is that “they don’t tell you what do after that.”

“Everyone stops at scoring” likely customers, he told VentureBeat. This is why his company is releasing a new product today that gives recommendations on what to do to turn free or trial users into paying customers.

Called the NAVIK Converter, the cloud-based tool uses such data as usage patterns or demographics to identify which freemium or free-trial users are most likely to buy subscriptions — and then it suggests specific steps to take.

“You’re unlikely to pay for a product you’re using now [for free],” Kaul pointed out. “We predict the next best action” needed to turn you into a paying subscriber.

During its beta period, that’s how the Converter saw use from Hightail, the file-sharing company formerly known as YouSendIt.

Recommendations are intended for specific segmented groups of potential customers. They can include product features that should be changed, promoted, or discounted, what kind of offer the message should include, the best time to approach the prospect, and whether the approach should be made through social media, email, or some other channel.

Accompanying the recommendation options is a projection of how many paid users will come out of the effort, and this is based on a simulation. As the effort unfolds, the Converter tracks results and can offer suggestions for mid-course corrections.

For Hightail, Kaul told us, the projections were 90 percent accurate. Once the steps are chosen, an API delivers the specs to an integrated marketing automation platform like Marketo for implementation. During the beta, Absolutdata said, the Converter increased conversion rates for client companies by five to 30 percent without increasing marketing budgets. 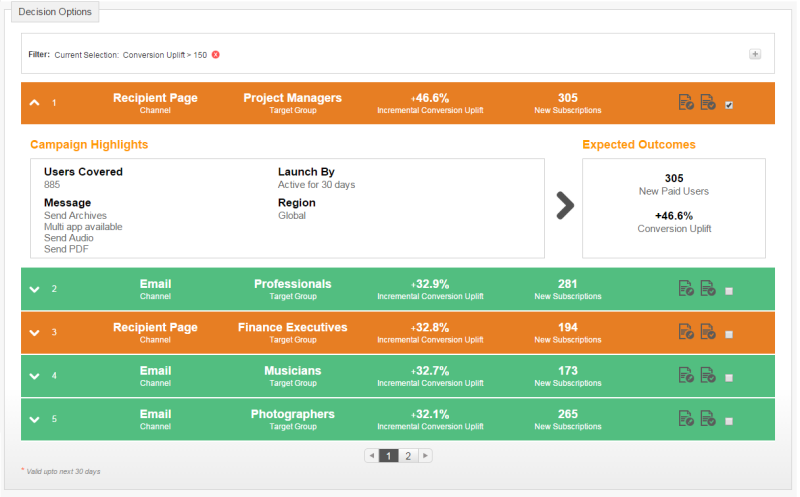 Above: A screen in NAVIK Converter with some decision options.

“The closest competitors we get” for NAVIK Converter, Kaul said, “are focused on which customers” to target. He mentioned Lattice Engines as a good example.

“Their focus is on who to target,” he said. “What to do after that is not what they do.”