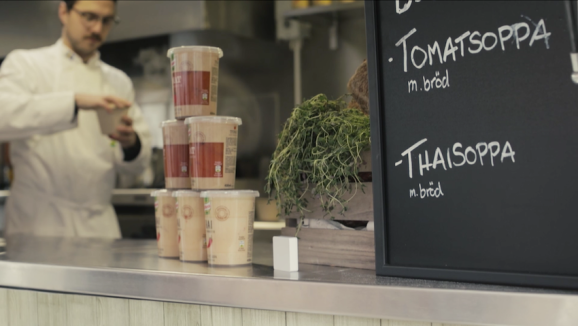 A beacon, which can be mounted anywhere, sitting on a counter.

“All the use cases we’ve seen so far [for iBeacons] use a push approach,” Glimr CEO and cofounder Robert Hedberg pointed out to VentureBeat.

An example: pushing a discount coupon for a video game to your smartphone, when an iBeacon in a physical store flags that you’re standing there in the game section.

Instead of that approach, he said, “we switched it around,” creating what the project collaborators call “physical retargeting.”

In November, a Knorr food truck in chilly Stockholm offered free warm samples of the brand’s tomato and Thai soups. Visitors could eat it on the spot or go home with samples. It set up iBeacons on the truck, and several people handing out samples were equipped with battery-powered iBeacons in their pockets.

Visitors to the truck who had the popular Aftonbladet app preinstalled were registered by the iBeacons as having been there.

iBeacons, the Apple-backed implementation of beacon technology, are small devices that repeatedly transmit a unique location identifier via Bluetooth. A mobile app in a customer’s smartphone will note the ID, and transmit it back to a publisher or advertiser via Wi-Fi or cellular data. This indicates that the user is standing, say, at the Knorr truck.

As Hedberg noted, the usual iBeacon scenario is that the publisher or advertiser then immediately sends a location-specific ad, coupon, or other marketing communication to the user in the store. The idea is that you’re more likely to buy that new game — or soup — right then.

But Europeans often have a more patient view of human interaction. Instead of immediately pushing a coupon for Knorr soup to the user, the Glimr approach was to wait: as in, wait until the next time the user opens the Aftonbladet app. It could be that evening, or days or weeks later. Then, on the first screen of the app, the user sees a discount coupon to buy Knorr soup at any Stockholm grocery store.

“The difference [from other iBeacon use cases] is that we’re using them to build up an offline profile,” Hedberg told us. That profile now shows that “these people have visited my store,” he said — or, in this case, my soup truck.

“Maybe it makes more sense to give the [iBeacon] info back to the retailer,” he said. “It makes for a better user experience.

“People working in a store are the biggest physical advantage there.”

So why get in their way by distracting the customer with push marketing on their phone? iBeacon technology might best be used to “understand you were here [in the store or at the truck],” Hedberg said. “Not that you are here.”

Glimr is a somewhat unusual data-management platform (DMP), he said, because it is also directly involved with iBeacons. A conventional DMP stores data, often cookie-related, which is then employed to segment users into groups for targeting online ads.

He noted that brands, at least in Europe, “consider it almost spam to push out [marketing] while you’re in the store.” They want to avoid a future where you’re walking past all these retailers on a busy city street, he said, and “they’re bombarding you with messages.”

Some digital marketers might debate if the Knorr soup truck experiment is actually “retargeting,” since there wasn’t an initial digital targeting. Retargeting usually refers to, say, showing a product ad to a prospect after he has visited a website, received a cookie, and bailed out of the shopping cart before buying that product. Some marketers have called it “ad stalking.”

Here, though, the term is being extended to consider the initial visit to the soup truck — a real world interaction — as the initial targeting. And the “cookie” is the app’s recognition that the user has been near an iBeacon at the truck. It’s this blend of physical and digital marketing that points toward some different approaches to beacons.

But it also points to a more refined use of beacons. Instead of pushing a coupon as soon as the user sets foot into a beacon-equipped area, as many geo-located scenarios have envisioned, the location identifier saves the marketing move till later.

This approach could go a long way to solving one of the cringe-worthy prospects of beacon marketing. You enter a store, and you have to deal with all those pesky marketing pitches on your phone.

For some of us, that kind of pushy marketing would only guarantee that we never set foot in that store again.