NetVibes has come a long way. In a world where business leaders, entrepreneurs, and developers shout the word “pivot” at a moment’s notice, NetVibes has stuck to its original plan throughout its (relatively, in Internet terms) long history.

And today, NetVibes has announced that its web tool is going to push that original intention further by becoming your dashboard for the Internet of Things (IoT).

Above: The evolution of NetVibes

NetVibes was created ten years ago by Tariq Krim and developer Florent Frémont. At that time, he was a rare European success in the global Web 2.0 scene, having created a music blog that was getting more readers than his previous employers, the French newspaper La Tribune. He wanted a simple way to monitor his 17 blogs, and the idea of NetVibes was born.

It turns out that other people wanted exactly the same thing. In an interview with The Guardian back in 2006, he said, “[O]n the first day we had 15,000 users.”

At the Future of Web Apps conference in London in February 2007, Krim claimed the platform had ten million active users, one-third of whom spent at least an hour per day on the platform. He also claimed that ten percent had NetVibes open the entire day. I was one of the ten percent.

In reality, it was nothing more than a progression of the “portals” we all used back in the early days of the World Wide Web, but the design and simplicity won over many an Internet user. NetVibes also managed to give every source an equal footing; your friend James’ blog looked exactly the same as The Toronto Star.

As the platform progressed, so did the capabilities. First came support for widgets. Then NetVibes created community elements that allowed users to share their dashboards with others. As the solution moved forward, it started to become more of an all-round analytics dashboard than the web portal of old. The more NetVibes evolved, the more it became a marketing and business analytics tool.

Since May 2008, Freddy Mini has been the CEO of Netvibes — Krim moved on to create Jolicloud. In February 2012, Dassault Systèmes announced the acquisition of Netvibes for an undisclosed amount.

The progression of NetVibes from homepage to dashboard to incorporating IoT is a natural one, to Mini.

“The first step in Netvibes’ evolution was listening — bringing together all your data from across the Internet,” Mini told me via email. “We then introduced social media and company analytics to enable drag-to-compare charts and visualization, so users can ask any question and learn from all their data. Users could then choose to act, based on the intelligence provided by the dashboard.”

The NetVibes platform now includes a raft of tools. The dashboard still exists, of course, and now includes an RSS reader, which has allowed the platform to expand its user base further since the death of iGoogle and Google Reader.

For business users, NetVibes also includes social analytics, which allows enterprises to get a view of the news, social media, enterprise data, and company reports in one place. For agencies, it provides a dashboard to allow reputation management and stay on top of everything the client has an opinion on, as well as promoting or engaging with events. Its MisoData tool lets you import Excel and CSV files to chart and analyze. You might consider NetVibes the ancestor of other, similar dashboarding tools, such as Cyfe and Geckoboard.

Today, NetVibes has continued its evolution by announcing its intentions to become the dashboard for the Internet of Things (IoT), and in turn is adding the likes of IFTTT and Zapier to its competitive landscape.

Calling its latest iteration the “Dashboard of Things” (DoT), NetVibes is starting with a limited number of hardware integrations, along with social interactions such as Facebook, Twitter, and Instagram.

“Netvibes is the definition of your internet on a topic. You aggregate, understand, and now can program your Internet — the Internet you’ve defined in your dashboard,” Mini said. “With DoT, users can now automate actions based on smart insights from the dashboard.” 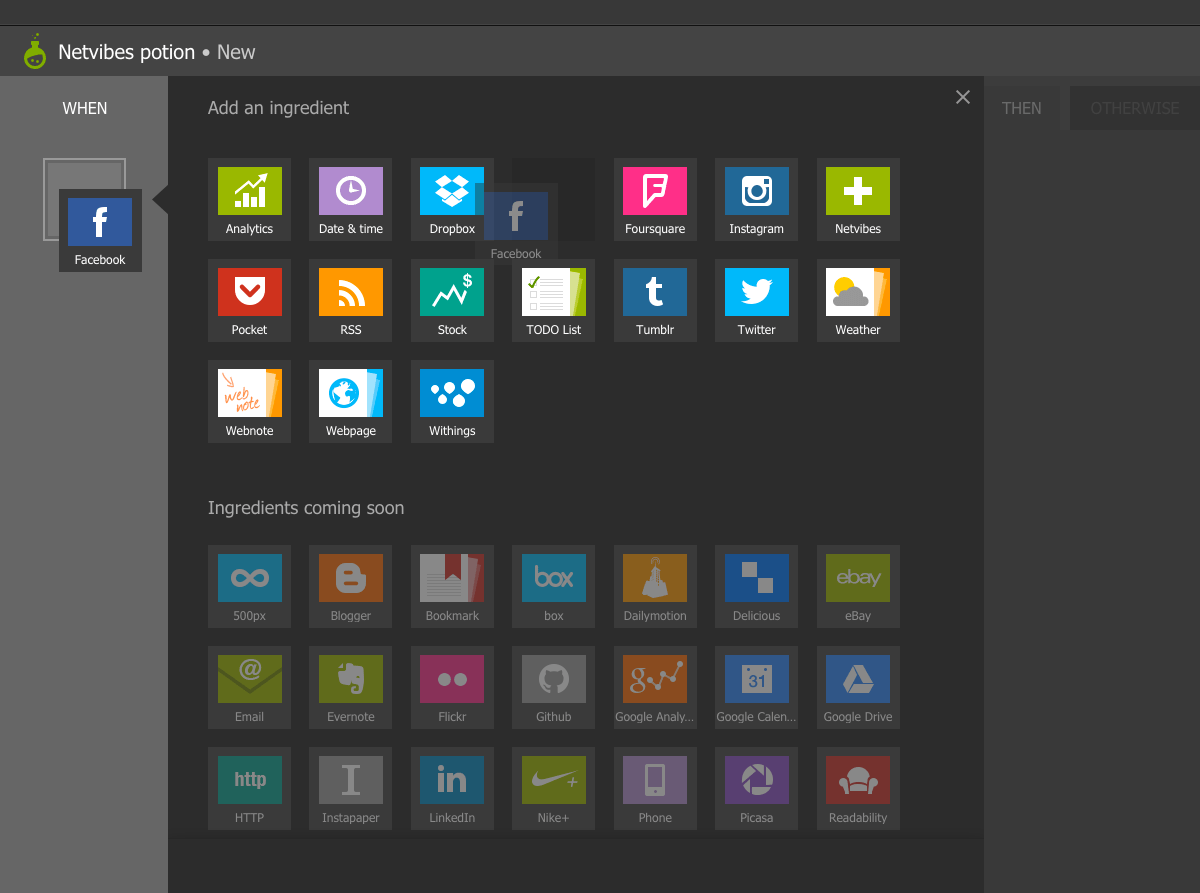 In addition to dashboarding the data from connected devices and wearables, NetVibes now offers a Potions app that allows the user to create “if this, then that, or else do this” automations. Users can choose from pre-made Potions (shared by Netvibes or, soon, the community), or they can create a new Potion from scratch by selecting the ingredients.

For example, a user might weigh themselves on their Internet-connected smart scale, announcing publicly on Twitter if their weight is within a target range. Otherwise, they might have NetVibes email them to keep trying. An agency user might have the platform automatically share client news and content to social networks as it becomes available.

While the initial launch of NetVibes’ DoT includes many established software and web tools integrations, it has a plan to increase hardware and wearable integrations at pace. 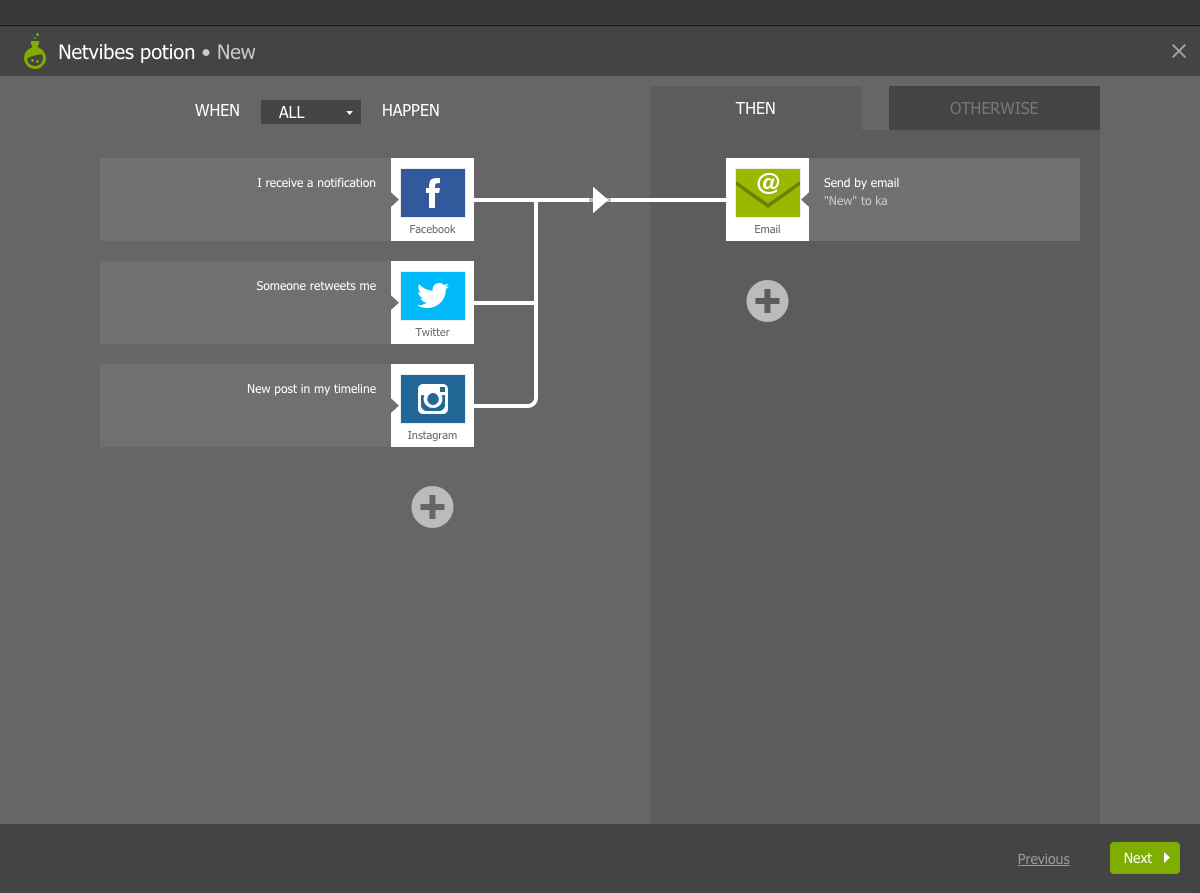 “Netvibes views connected devices as a third, new type of ‘things’ in addition to content and people,” Mini said. “To make this world of things totally programmable, we’ve developed a new language — Netvibes [Programming] Language (NPL) — which we’ll make available to everyone in order to create triggers and actions on everything.”

So unlike its new competitors, you won’t have to wait until the web tool vendor decides to add an integration to your favorite wearable or hardware accessory.

NetVibes’ DoT platform is available immediately upon request as a private technology preview, and general availability is expected later in Q1 2015. The technology preview features the Withings smart scale, and support for many more devices is planned.

“Today Netvibes ecosystem has 260,000 apps. We plan on doing the same with all kind of ‘things’; content, people, and connected objects,” Mini said.