It may be one of the four major online mapping platforms, but OpenStreetMap (OSM) doesn’t always get the same recognition as Google Maps, TomTom, or Nokia’s Here. The reason? OpenStreetMap has never really been a go-to navigation destination in its own right, and has always been more about providing the tools and a “back-end” for third-party developers to include maps in their own applications.

This is changing, however, as OSM has now introduced what could be construed as its first direct user-focused feature. Through the main OpenStreetMap.com website, you can now search for directions from and to anywhere in the world. 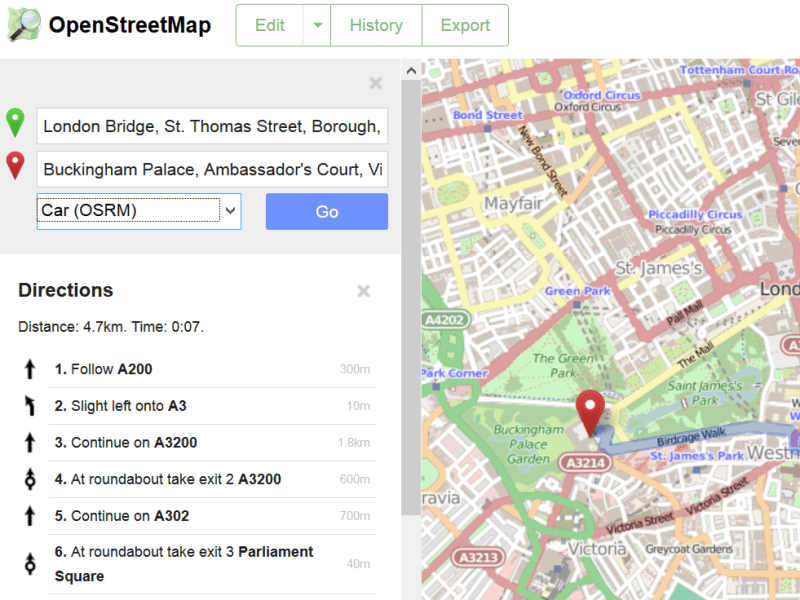 While the feature itself may not be a major deal in its own right, given that you’re already well-served with a myriad of A-to-B navigation tools — including the aforementioned Google Maps — it’s a symbolic advance for the OSM project, and it’s one designed to encourage greater user uptake.

A ‘Wikipedia for maps’

Founded out of the U.K. in 2004, OpenStreetMap can be likened to a “Wikipedia for maps” — it’s a completely open, free, editable map of the globe, with contributions coming in from millions of users. The overarching body that manages the OSM project, the OpenStreetMap Foundation, is a not-for-profit that gets by largely on donations from the public, as well as other public and private institutions.

Today, a number of well-known and popular applications use OSM maps and data, including the now Telenav-owned Skobbler, which offers downloadable maps for use offline, and MapQuest. Other major companies that tap OpenStreetMap data include Foursquare and the mighty Apple.

Developers essentially take the OSM building blocks and create features on top of it, including turn-by-turn directions and voice navigation. It’s for this reason that OSM often goes underappreciated and even undercredited.

While the main OpenStreetMap website could hitherto be used by the general public for searching for destinations and perusing maps, it wasn’t designed with that in mind — it has largely been used by OpenStreetMappers to edit and improve maps.

With directions now in tow, OSM not only wants to shine a light on its own platform, but increase uptake among the global map-editing community. Indeed, OpenStreetMapper Dan Stowell revealed in a blog post yesterday that it hopes to incentivize people to “fix” data on its maps, including things like “one way roads” or “buses only” — data that won’t always show up in the standard map view. With an A-to-B route mapped out, users familiar with an area can see immediately what’s awry and make an edit on the spot.

“The end effect will be OSM’s data going up one more level in terms of its quality for routing,” explained Stowell. “This will empower everyone to do great things with geographic data and getting from A to B.”

So this move is perhaps less about luring in more people to contribute (though that could be one outcome) than it is about encouraging existing editors to make more edits directly from the homepage.