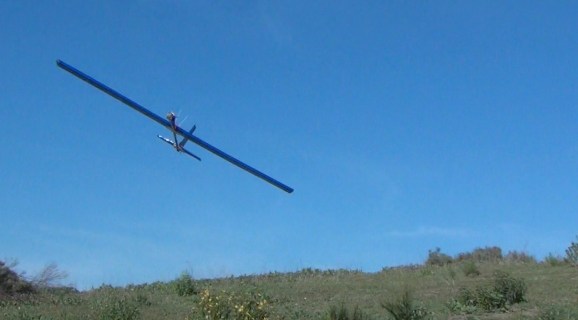 Although small commercial drones are getting more and more sophisticated with each passing month, most these days have a maximum battery life of around 20 minutes or so. But one startup has a plan for drones that can stay aloft for hours.

The company, Newport Beach, California’s XAir Unmanned Aerial Systems, has built a prototype fixed-wing drone that it says harnesses wind power to keep it in the air for hours at a time.

Although the 24-ounce aircraft employs a small solar panel to power up its electronics and its onboard battery, its primary lift comes from the wind. During trials, XAir got its drone prototype to fly for more than two hours with no observable battery drain, but Seshu Kiran GS, the company’s founding engineer, told VentureBeat that in theory, it could fly almost indefinitely in the right kind of wind.

XAir is developing a variety of flight and ground control systems, software, and sensors, along with several different types of drones. Some have fixed-wing structures, while others use rotors. The company is targeting the agriculture, mining, infrastructure inspection, cinematography, mini-cargo, and oil and gas industries, all of which have obvious needs for long-flying drones.

Of course, such usage in the United States is a regulatory problem, as the Federal Aviation Administration has restricted the commercial use of drones. Recently, the FAA proposed new guidelines for commercial drones weighing 55 pounds or less that would limit them to an altitude of 500 feet or lower and a speed of less than 100 miles an hour. But until new guidelines go into effect, industries like those targeted by XAir must get exemptions from the FAA in order to use drones, and such exemptions have been extremely hard to get.

Still, Seshu Kiran said XAir has been talking to companies in the mining industry about using its fixed-wing drones for what he called “conductivity mapping,” and that he expected that work to begin by this May. He did not say if it would be inside or outside the U.S.

Seshu Kiran said that the impetus for XAir’s wind-powered drone is applications that require longer flights than can be made using traditional battery-powered systems. “For long-haul aerial missions, batteries add significant weight,” he said, “and reduce the mission payload. Harvesting wind energy for lift and thrust in the desired direction, or to stay in the air, add significant improvements to safety.”

Fixed-wing drones are the way to go to achieve the company’s goals, Seshu Kiran said. “With fixed-wing, you can trade lift for thrust, which adds motion in the mission’s path. In case of moderate-to-gusty winds, [the drones] can even harvest energy by solar and/or stress torsion on the wings.”

The company’s 24-ounce prototype — which was considered the right size because it wouldn’t be an expensive loss if it crashed during testing — features electronic controls, wind-speed sensors, a dedicated micro-computer, and software that together analyze and leverage the direction and dynamic components of wind during flight, he said.

XAir is six months old. The company is not disclosing any of its financials.