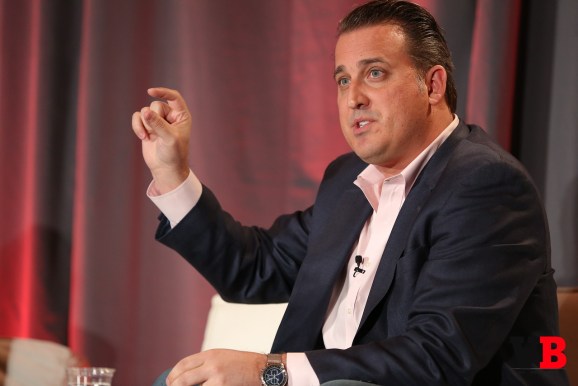 SAUSALITO, Calif. — Spotify knows a whole lot about what its millions of users are doing, when they’re doing it, and where.

During a session at VentureBeat’s Mobile Summit here today, Spotify vice president of North American advertising Brian Benedik said that thanks to its requirement that every user — paying or non-paying — sign in to use the service, it collects an “enormous amount of data on what people are listening to, where, and in what context. It really gives us insight into what these people are doing.”

Today, Spotify has 15 million subscribers who pay $9.99 a month, Benedik said, up from 12 million a year ago. The company, which in its early days provided only its desktop version for free, now offers a free tier of service for mobile users. Thanks to that, it has gone from 90 percent desktop use to more than 50 percent mobile since 2013.

Benedik explained that thanks to the data it has on its users, both from those who register directly through the service and from those who sign in using Facebook Connect, it knows a lot about users’ age, gender, and location. “All that first-party data is wonderful,” he said. “We can follow a listening from the desktop to” other devices.

At the same time, thanks to the semantics of the company’s playlist service, Spotify knows a great deal about the kinds of things its users are doing. For example, Benedik said, users have created more than 400,000 barbecue-themed playlists over the years. So when someone is playing one, the company can be somewhat certain that that person and their friends are having a barbecue. That, of course, can help it target better advertising to its non-paying users.

It’s been just 14 months since Spotify realized it had to offer some kind of free mobile service to its users. Benedik called it the company’s “‘Oh my God’ moment,” a day when it knew that although it had millions of desktop users, it had to find a way to renegotiate its agreements with the record companies in order to provide songs without charge to those on smartphones and tablets.

That renegotiation took about a year, Benedik said, and the “pace of…change” as users have migrated by the millions to mobile has been “unbelievable.”

In the meantime, the company has learned to help its brand partners promote their own products and services. Sometimes, Benedik said, Spotify will even help out companies that are seen by some to be its competitors.

Case in point is Red Bull. People may see Red Bull as a drink maker, but in reality, Benedik said, it’s a music label, since it sponsors a great deal of artists. By letting Red Bull showcase those musicians on Spotify, the company has helped create a Red Bull discovery mechanism. That’s part of Spotify’s “collaborative” approach to brand partnerships, Benedik explained.

A similar example is how Coca-Cola creates and promotes its own branded playlists on Spotify.

The drinks giant has built a number of Coke-related playlists, many of which are built around the idea of “happiness,” long a Coca-Cola theme, and it uses its wide array of social channels to promote those playlists. “This system allows Coke to have a music identity on Spotify,” Benedik said.

And all of this, he added, goes towards what Spotify has learned over the years: While millennials, perhaps the company’s most important demographic, don’t like ads, they do like brands — at least ones that promote themselves intelligently.

In the end, all of this has helped Spotify bring in real revenue, even from its non-premium users. That’s because, as Benedik said, “the longer you stay on [Spotify’s] free model, the more you are likely to upgrade to premium.”

Added Benedik, “Premium doesn’t work without free. There’s a graveyard of services that have tried to go at this over the last ten years with premium only. It doesn’t work unless you’ve got free and premium working together.”

For now, he said, a Spotify premium user is still a bit more profitable than a free user. “I think you’re going to see the free user catch up at some point, but we’re not quite there yet.”