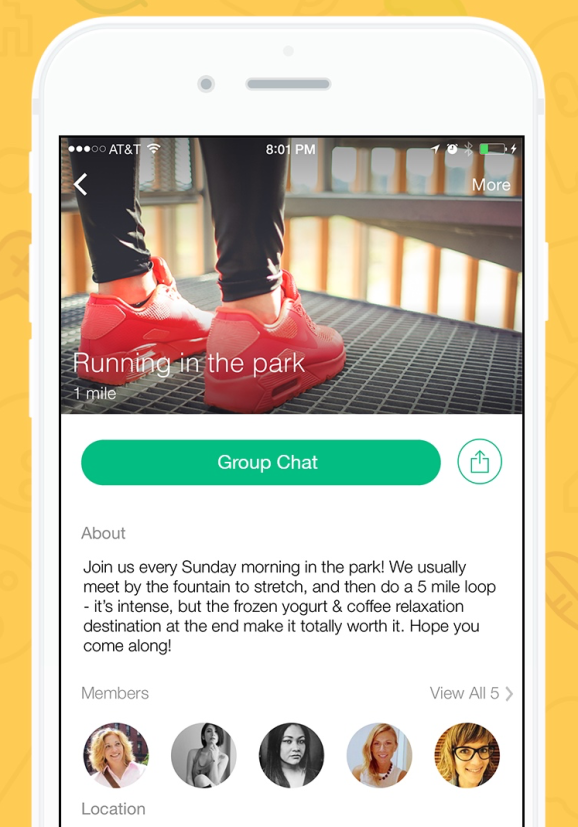 A group screen in Blupe

Blupe may sound like a big bubble surfacing, but in this context it’s the name of a new, group-oriented social app that launches today.

It’s a wholly-owned offspring of Momo, a social app used by more than 180 million Chinese to discover and chat with people nearby. Momo founding team member and now Blupe CEO/founder Sichuan Zhang has relocated to San Francisco from Beijing, assembling a team to build and launch the app.

A new social app needs a niche, and Blupe’s is the interest group. You can only chat with other group members, and anyone can create a group. A group can have between two and 100 users, who must participate within 60 miles of each other. A group founder is in control, able to admit new members or boot out unruly ones.

“I recently moved into a new apartment” in the San Francisco area, Zhang told me. Because it’s a new building, she said, there’s still construction going on. To help share information about construction-related issues, she created an apartment group on Blupe, which scored two members after two days.

“We can chat about what’s going on here,” Zhang said. “It’s very convenient.”

As it moves from its beta phase with several thousand users and hundreds of groups, the free app is hunkered down for the time being, focusing on user growth.

“There are many [monetization] opportunities for location-based apps,” Zhang pointed out. Possibilities could include location-specific offers or the kinds of premium memberships Momo is offering.

She said that “Meetup is not mobile-first, because it has a long history” and began on the desktop Web.

The user experience in the mobile app is “not that good,” it’s more formal than the casual Blupe, and it’s event-oriented, Zhang said.

Nextdoor is “more like a closed, neighborhood watch,” she noted, oriented toward “broken cars down the street or [a neighbor asking] for someone to watch her dog for a couple of days.”

“It’s not really social,” she said. She added that Blupe can do neighborhood events and, at some point, will add an events feature.

Blupe is being launched in the U.S. first on iOS. There are no plans yet to move it to its older sibling’s native country.