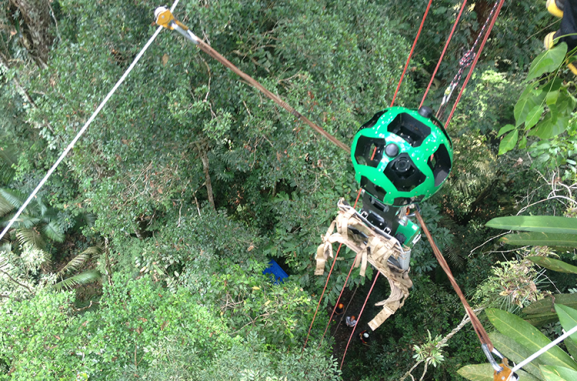 Two weeks after landing in Greenland with impressive panoramic views, Google has taken to the treetops of the Amazon rainforest on a zipline to capture some stunning imagery of life in one of the world’s greatest ecosystems.

Though this isn’t Google’s first effort at obtaining images from the Amazon rainforest, it is the Internet giant’s first ever attempt at capturing imagery in this way for Street View.

Google has teamed up with the Amazonas Sustainable Foundation (FAS) for this latest initiative, the same organization it partnered with back in 2011 to capture a small part of the Rio Negro Rivers in northwest Brazil.

Though Street View has traditionally been about capturing street-level images for Google Maps, it has long transcended this by evolving its cameras and techniques to record imagery from a myriad of weird and wonderful places — this includes underwater at the Great Barrier Reef, and now on a zipline from the treetops of the Amazon. The latest imagery isn’t just from great heights, however, as Google has taken its cameras on boats down 500km of rivers and 20km of trails too.

With deforestation in the Amazon accelerating after a decade or so of stabilization, shining a light on the perilous position of one of the world’s greatest natural resources is surely a good thing.