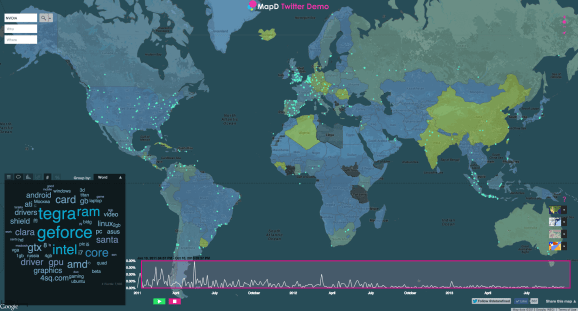 This sponsored post is produced in association with NVIDIA.

A few years ago, Todd Mostak was taking a database course at MIT and saved up some money to buy two midrange gaming video cards to run benchmarks for his final project. Today, that final project is the core of a cutting-edge startup that’s set to tackle Big Data in a radically different way.

Todd is the CEO and co-founder of MapD, a startup uniquely situated in a space where there are virtually no competitors: hyper-interactive real-time visualization of massive amounts of data from sources like Twitter and Facebook.

MapD uses graphics processing units (GPUs) to crunch Big Data — the sort that usually only rooms full of servers are able to do, but “at a fraction of the price of what a big cluster [of servers] would cost, with much greater performance,” Todd tells VB in an interview. “One server running MapD can scan data at rates exceeding a trillion rows per second –literally orders of magnitude faster than any other solution out there.”

“We basically see it as a supercomputer in a box,” Todd says.

Last year, NVIDIA, Google Ventures, and a bunch of other angel investors agreed with him, granting the company $1.5 million in funding soon after it won $100,000 at NVIDIA’s 2014 Emerging Companies Summit.

“We kind of came at this from a strange angle,” Todd says.

When he was finishing his masters in Middle Eastern Studies at Harvard, he said he wanted “to analyze the relationship between Islamic discourse and online forums,” using these forums and Twitter to see how they related to the socio-economic dynamics of Egypt.

“I had fairly big data sets, at least for my home workstation, basically hundreds of millions of tweets,” Todd explained, saying he was underwhelmed with the performance of conventional tools in crunching so much data.

He found a solution where many wouldn’t even consider looking: GPUs. “When I started this, people were like ‘Oh, you can’t really do anything serious on GPUs because RAM size is really small,’ and that was partly true back in the day,” Todd says, “In 2012 Harvard bought a system with 4 Nvidia GPUs for a total of 16GB of GPU RAM to run MapD on, and fast forward to now you can have a system with 200GB of GPU RAM and that’s going to probably double or triple within the next year.”

Todd enrolled in a Harvard course focusing on GPUs and a database systems class at MIT, and his final project was the very first iteration of MapD — a real-time global Twitter map with integrated controls for analyzing data.

Getting attention and overcoming startup challenges

With MapD’s beta launch close at hand, and with the company’s successful year in 2014, it’s been turning some big heads: brands like Facebook, government-affiliated research labs like the MIT Lincoln Laboratory, and organizations like the Global Burden of Disease project supported by the Bill and Melinda Gates Foundation. MapD is even in discussions with a Fortune 500 company, one of the largest and most widely recognized brands in the world.

But it wasn’t all smooth sailing this past year. In fact, right after the company won NVIDIA’s $100,000 Early Stage Challenge prize, they found themselves in a predicament.

“We had this prototype system that I felt was pretty impressive for Twitter data and it certainly turned heads,” Todd said, “but it was far from the kind of full-fledged system that you would actually deploy to a customer.”

The startup learned a hard lesson: “Just because you demoed well doesn’t mean that you have a system that you can just let go into the wild.”

With the seed stage funding, Todd and his team moved out of their apartments in Boston to a small office in San Francisco. Being in the Valley helped them attract new talent, including their current VP of Engineering Dr. Wei Hong, a startup veteran who helped build two database companies and one IoT company from the ground up.

The new team helped build on the company’s founding vision, with a product that is “much more extensive and robust, with greater SQL support and all these things that actual businesses need,” Todd said.

Looking back, Todd credits winning the Early Stage Challenge at NVIDIA’s Emerging Companies Summit as a turning point for his company. He says, “The fact that we won that is a great badge of credibility we can take to investors and customers and also to potential hires.” And the $100,000 prize that came with it helped, too.

The beta and the grand plan

Now MapD is on its way towards its goal to create a supercomputer in a box that people can pull up and use anywhere via smartphones and laptops.

“The trend of big data analytics these days is stringing a bunch of servers together to get the performance you need,” Todd says, “but not every company has the rack space or the money to afford that.”

MapD offers a comparatively miniscule alternative, allowing users to take billions of rows of data and filter, aggregate, and correlate the data in real-time. Users can see the broad swathe of overall data or drill down to individual records.

MapD’s ultimate goal: to democratize big data. Todd admits they’ll probably start by running in a server room powering web clients, but eventually their plan is to bring MapD to everyone with a GPU, including the small but powerful GPUs in laptops, smartphones, and tablets. “We can run efficiently on different machine architectures, it’s not just x86 and Nvidia cards — we see great speedups on ARM as well”.

“MapD running on your laptop can give you what you would normally look for in a big server,” Todd says, “To democratize big data means making it where you don’t have to have a budget for a whole server room.”

The 2015 Emerging Companies Summit will take place Wednesday, March 18, 2015 at the San Jose Convention Center in Silicon Valley. A dozen startups will compete for this year’s $100,000 Early Stage Challenge that afternoon from 2-4:30 pm.