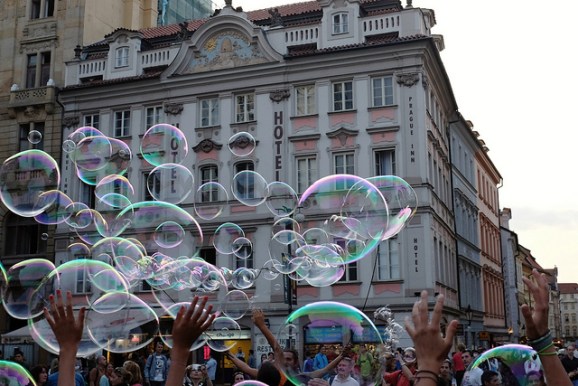 Staring ever deeper into its own navel, Silicon Valley just can’t stop talking about whether it’s in a bubble.

If you’re on the ground there, it can certainly seem that way. There’s the endless parades of gigantic corporate shuttles clogging the roads, hiring at a frenzied pitch, partiespartiesparties, and venture capital flowing like vodka down a giant ice luge.

But if you think this is all getting off the rails, well, think again. Through the first two months of 2015, initial public offerings of stock are down to 26, a drop of 35 percent from the same period a year ago, according to statistics from the Renaissance Capital IPO Center.

In the world of tech there have been only three IPOs so far this year, which have raised $800 million, according to Renaissance. The most notable has probably been the Box IPO in January, which raised $175 million.

Even worse, proceeds raised so far are only $4 billion, down 44.4 percent from last year. And the forecast for IPOs remains chilly. The 32 IPOs filed so far this are down 50 percent from a year ago.

Granted, stocks haven’t been on fire this year. But they haven’t tanked either, which makes the cold shoulder from Wall Street a bit harder to explain. The Dow Jones is up .13 percent on the year; the NASDAQ is up 4.24 percent; and the S&P 500 is up .63 percent.

Heck, even the IPOs that have happened have done well. Renaissance says early returns on those IPO this year are up 15.6 percent.

So what gives? Hard to say for sure at this point.

But the flip side to this is that there’s also no reason to panic. The current pace of IPOs has simply settled down to a similar pace that we saw in 2011-2013.

The real takeaway is that if anyone thought the accelerated pace of 2014 meant things were overheating, well, they’re not. The fact that 2014 was the biggest year for IPOs since 2000 led to some predictions that 2015 would be even bigger.

At the moment, it doesn’t look that way. Of course, if Uber suddenly decides to file for an IPO this year, all bets are off in terms of the amount of proceeds that could be raised. But for now, tech companies are taking their time approaching public markets.

And for Silicon Valley, that means that entrepreneurs, VCs, and investors are keeping their delusions of grandeur in check. Which is always a welcome state of mind.