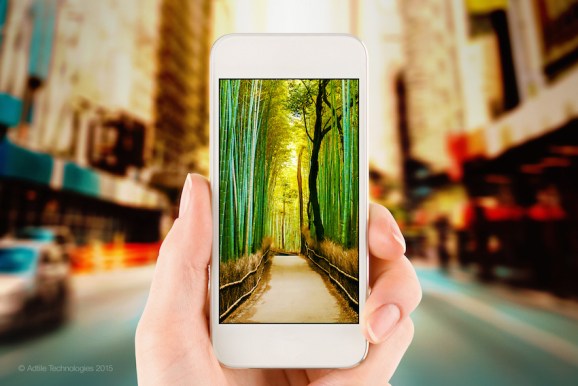 San Diego-based mobile development startup Adtile is today announcing its VR technology, which provides a 3D virtual world experience that has similarities to Tango — but for any phone.

It uses a “hardware component that doesn’t exist in today’s smartphones,” a depth sensor, he told me, adding that Tango creates augmented reality by detecting depth through the camera lens and overlaying its virtual world.

“Adtile VR’s Space Sensing Technology is not tied to any hardware and captures space and movement, not depth itself,” Forsblom explained. The result, he said, is also a real-time 3D experience, but one that moves as you do and is not added on top of the real world.

In addition to no special hardware requirements, the HTML5-based tech also does not require a headset for experiencing this invisible world. The phone acts as your virtual world viewing device, tracking your velocity and position and showing you an artificial world.

Currently, the framework and SDK — targeted at brands and their agencies — is only available for iOS devices. An Android version is in the works.

The VR tech uses Adtile’s Firemotion platform, also based on HTML5 and first released for the company’s Motion Ads earlier this year.

Motion Ads employ a phone’s sensors to track and display gesture and motion, allowing users to do things like draw a heart in the air as part of an ad.

Forsblom noted that Adtile VR is a “kind of a natural extension of what we’ve done” with Motion Ads.

Engagement rates for Motion Ads are over 30 percent, he claimed, “probably three or four times the average.” He reported that “time spent on these ads [is] about 25 seconds.”

“People don’t spend 25 seconds” on most apps, he noted.

Although both use the same Firemotion platform, Motion Ads offer 2D space while the newer Adtile VR is 3D. Among other things, the VR tech is simultaneously capturing and displaying the results for three kinds of motion — short, medium, and long-range. A small movement, for instance, results in a large change in the near objects but smaller changes in the distant ones.

While the VR tech is now being shown primarily as geometric shapes, the company envisions a wide range of use cases, like visiting art galleries in your living room or walk-through virtual game environments.

On the technical side, Forsbloom pointed to LeapMotion’s 3D sensing tech for device interaction and Oculus VR as technologies beyond Tango that are also real-time and relatively inexpensive ways to realize 3D environments. There are also a variety of smartphone-based VR headsets from Samsung, Zeiss, and others.

But in terms of marketing and content creation of 3D environments using regular smartphones, he doesn’t “see us having much competition.”