AUSTIN, Texas — Rhapsody, the online music streaming service, announced today that it is making 30 million songs from its catalog available for tweeting and instant listening by Twitter users.

Just in time for the opening of the South by Southwest Music festival (SXSW) here, Rhapsody, which has a catalog of about 34 million songs, and 2.5 million users in 30 countries — about half of whom are in the U.S. — said it will be the first music service whose massive catalog of songs can be legally embedded directly in tweets.

Starting today, any registered Rhapsody user in the United States will be able to tweet songs directly from the company’s app, and any Twitter user will be able to play those songs from within the tweet, or retweet them. Twitter users do not have to be Rhapsody members to listen to the songs. 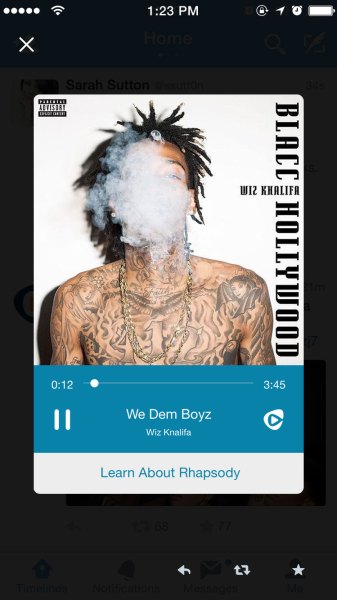 Rhapsody members using the company’s app will see a little blue Twitter symbol in the lower right corner of a song’s album art. By clicking that symbol, they will automatically send a tweet. Twitter users who follow the Rhapsody member will see that song appear in their feed, along with a play button. When they click the button, the song will begin playing.

Until now, Rhapsody users could include links to songs in tweets, but anyone clicking on them would be sent back to Rhapsody and asked to sign up before being able to listen. Memberships cost $10 a month for an all-you-can-eat plan, or $5 a month for a more limited plan.

According to Ethan Rudin, Rhapsody’s chief financial officer, the company worked with Twitter on the integration, part of the goal of which is to “harken back to the days when you could hand someone a cassette tape or a CD and help people discover new bands.”

Asked if Rhapsody is worried about competitors replicating the new feature, Rudin said, “This came together so fast, we’re just interested in creating an experiment. We want [our competitors] to copy us. We’re the first people doing this, and we’re just relying on the fact that we’ve been really, really fast.”

Rudin said that it’s ironic that as music streaming services — like Spotify, Rdio, Rhapsody, and others — have proliferated, the discussion and dialogue around the songs and artists has become harder to find.

The SXSW Interactive festival, which ends today, is seen as a great place to launch new mobile apps, or at least give them a huge boost, by exposing them to a concentration of thousands of power users. Anyone in Austin for the past few days has seen that dynamic play out for the live streaming video app Meerkat; in the past, Twitter itself blew up here, as did Foursquare and a number of other apps.

Rhapsody is hoping that the SXSW Music festival will be similarly a great place for a critical mass of musicians and music lovers to discover its new tweeting feature, as well as many of the artists and songs available through the service.

Rudin said that Rhapsody did have to renegotiate the terms of its licenses with the record companies in order to enable the new feature, as it does any time it does a new integration.

Rhapsody has had a long and slightly rocky road. It was first launched in 2001 by RealNetworks, and in 2010 spun off as a stand-alone company. Along the way it was eclipsed by Spotify and others. But Rudin hopes its new Twitter integration can change that dynamic. “Arguably, we were 13 years too early,” he said. “So it’s time to take our rightful seat [at the head of the table] again.”