That’s what Skimlinks CEO Alicia Navarro calls “commerce-related content.” It’s online editorial content that features e-commerce, like a story about spring fashion trends that links to clothes you can buy.

That’s a mouthful to keep repeating to publishers like Huffington Post, Gawker, and Gizmodo, she said, so she’s shortened it to comtent. (VentureBeat does not use the platform.)

Skimlinks’ technology allows publishers to readily reap affiliate fees when readers of a story about best new cameras click on, say, a picture of a recommended camera and buy it.

The company has just launched the showcase Comtent.com, which it calls the first of its kind. The intention: to “raise awareness with publishers who are probably already creating some form of comtent, but not yet leveraging its revenue potential.”

Forms of comtent include buying guides, listicles, instructional posts, trend stories, deals and sales, and image galleries. But the key, Navarro told me, is that the content is created by the editorial department without a tilt toward those products that make money for the publisher.

Although Skimlinks is making all of the site choices, and the site will be used in Skimlinks sales presentations, she said the selections do not need to use its platform. In fact, Skimlinks’ brand name is not readily visible on the site. 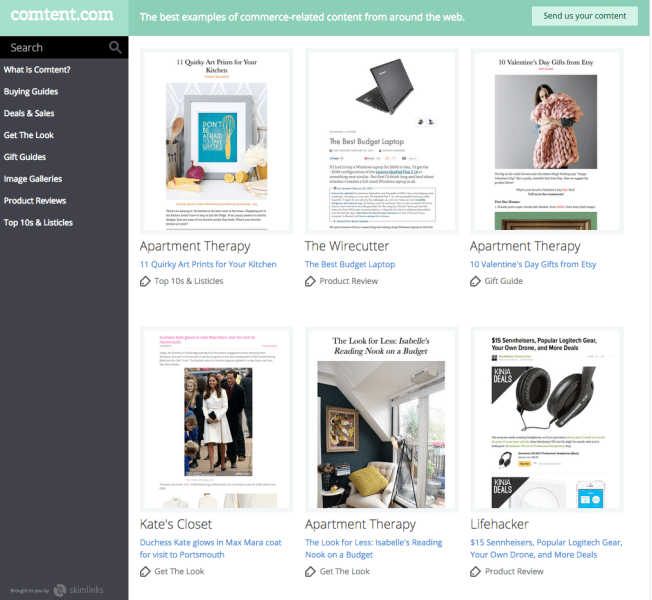 Above: A screen from Comtent.com

Online content has morphed into a wide variety of forms. Some of them — like native ads — try to resemble “native” editorial content when it is really an ad with lots of words and pictures.

Similarly, comtent is part of a spectrum.

In Navarro’s definition, comtent resides on the end where an editor or the writer makes all the decisions about what is written, without consideration for which related product links will make the publisher money. In this scenario, the spring fashion product choices are entirely about the best ones.

“It’s absolutely possible to create content that editorial believes in but can be monetized as well,” she told me.

At the other end of the spectrum sit editors, writers, and bloggers who write about things that bring them the most money through fees or affiliate links. These include the “influencers,” whose blogs or social posts attract many followers and who eagerly bid for the chance to write or video-testify about a new face cream.

Between these two ends are those writers and editors who can steer their editorial choices to the products that return fees, but aren’t always so clear about it.

The problem: The reader doesn’t know what went on in the writer’s mind or in the editorial meetings.

In this new world of evolving content, then, a lot depends on trusting the publisher’s brand. Do I think the New York Times would slant this story about best new software to get more affiliate money?

By emphasizing editorial dominance, Comtent.com can showcase those brands that, in its opinion, are not jeopardizing their editorial reputation even as they leverage “their revenue potential.”

If it can stay honest to that mission, it might provide encouragement to brands who value their integrity. Skimlinks distinguishes itself from competitors like VigLink by positioning itself as the platform for high-end publishers, so its own reputation is on the line.

If, however, it also showcases client publishers who have become craven chasers of affiliate links in their stories, Comtent.com will become an example of a much different sort.

Navarro also has another goal for the site.

“I will know I’ve succeeded,” she said, when “the dictionary includes the word ‘comtent.'”