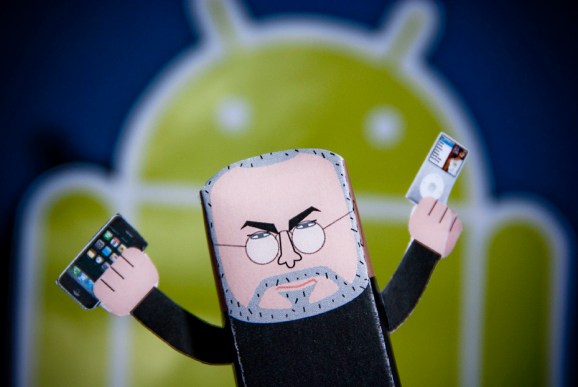 The new Steve Jobs biography landed today in the wee hours, and it offers an intriguing look into how the Apple cofounder evolved over the course of his career. VentureBeat’s Harrison Weber plowed through the whole thing and gives it two thumbs up.

In writing, “Becoming Steve Jobs,” authors Brent Schlender and Rick Tetzeli said they wanted to paint a more complex, nuanced portrait of Jobs. But while the book is meant as a bit of corrective to Job’s image as a tyrant, the writers also don’t sugarcoat the fact that he remained capable of holding deeply personal grudges until the end of his life.

They write: “In the typical Pixar movie, or in the Disney animations that started getting better and better toward the end of Steve’s life, true emotions are unfrozen, reconciliations are wholly achieved. But Steve’s life wasn’t a movie. It was inspiring, confounding, and unabashedly human, to the very end.”

Indeed, these foibles remain present enough that the authors devote the next-to-last chapter to listing them in detail: “Blind Spots, Grudges, and Sharp Elbows.” Here are six of the grudges Jobs held right until the end of his life:

1. Neil Young: The singer-songwriter had criticized the sound quality of iTunes downloads. Jobs was pissed that he’d said so in public. Later, Young tried to smooth things over by offering Jobs a gift of some of his vinyl records.

“Fuck Neil Young,” he told one of the authors who had relayed the offer. “And fuck his records. You keep them.”

2. Michael Eisner, Disney CEO: The pair had some tense negotiations over digital content. According to the book: “Even after Steve had gotten what he wanted from Disney, Eisner remained a curse word to him.”

3. Jean-Louis Gassée, former Apple executive: He supposedly told Apple CEO John Sculley that Jobs was trying to push him out of the company back in 1985. According to the book: “A quarter century later, Steve still snarled whenever the Frenchman’s name came up.”

4. Adobe and cofounder John Warnock: Adobe had originally been a big supporter of Apple. But at one point, Warnock began to favor Microsoft’s Windows over Apple. Later, Jobs responded when Apple had its comeback by refusing to put Adobe’s Flash on the iPhone and iPad. Jobs also publicly trashed Adobe for the quality and lack of innovation of Flash.

5. Jon Rubinstein, former Apple executive: Once a treasured Apple insider who played a key role in developing the iPod, he retired after feeling he was no longer in Jobs’ inner circle. A year later, he took the role of CEO at rival Palm. The prompted a short, angry call from Jobs. After that: “Ruby and Steve never spoke again.”

6. Google: Once the best of friends, with Google’s Eric Schmidt serving on Apple’s board, there was an acrimonious split after Google released its free Android mobile operating system. Jobs felt like it was a cheap copy of the iPhone’s operating system and remained furious at the betrayal until the end. He also launched a global legal battle against makers of Android phones that continue until this day.