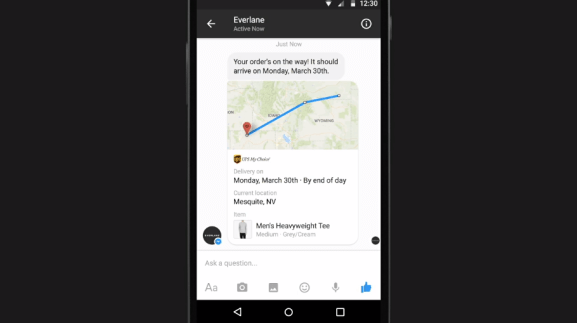 Facebook's Messenger Platform will let you track the shipment of things you've ordered from online retailers -- right inside Messenger.

At the F8 conference today, Facebook officially announced the Messenger Platform for mobile messaging, highlighting one of its key functions as a direct conduit between users and businesses.

Facebook chief executive Mark Zuckerberg demonstrated that users will be able to place an order with an online retailer, then change the order or shipping details later via Messenger.

The function appears to preempt the native “chat” features on many retailers’ sites. Facebook’s David Marcus said the chat functions at retail sites are “pretty terrible.”

Messenger will open up a threaded message with a retailer after an order is placed. The user can use the thread to ask freeform questions of the retailer.

The platform also sends an instant shipping notification to the user’s cell phone when they make a purchase.

Facebook says the new function will roll out “in the next few weeks.”