Photography community EyeEm has lifted the lid on an all-new marketplace where its users can sell their own images.

EyeEm Market launches today after an extended beta period, and the Berlin-based company is emulating other photo-centric companies by letting those who perhaps hadn’t considered making money from their snaps to, well, make money from their snaps. Yahoo-owned Flickr launched a wall art service last year that lets its millions of users monetize their Creative Commons uploads, while fellow photo community 500px also offers a portal for users to shift their handiwork.

EyeEm also revealed it has now amassed 13 million users since its inception back in 2011, and while it has often been compared to Instagram in terms of how users share photos, the service has always tried to be more about photography than selfies. Indeed, the company introduced a new feature that lets you edit photos like a pro back in December and, with today’s move, EyeEm is further distancing itself from Instagram by targeting publishers, editors, brands, and more with the millions of user-generated images available on the platform.

With that in mind, Market signals a deviation from EyeEm’s hitherto mobile-only approach to uploads — users on Market will now be able to upload photos from their desktop upon request, meaning this is literally targeting the professional fraternity now as it’s possible to use all those photos taken on your DSLR. Before, a user would have to transfer their DSLR photos to their phone for use with EyeEm. 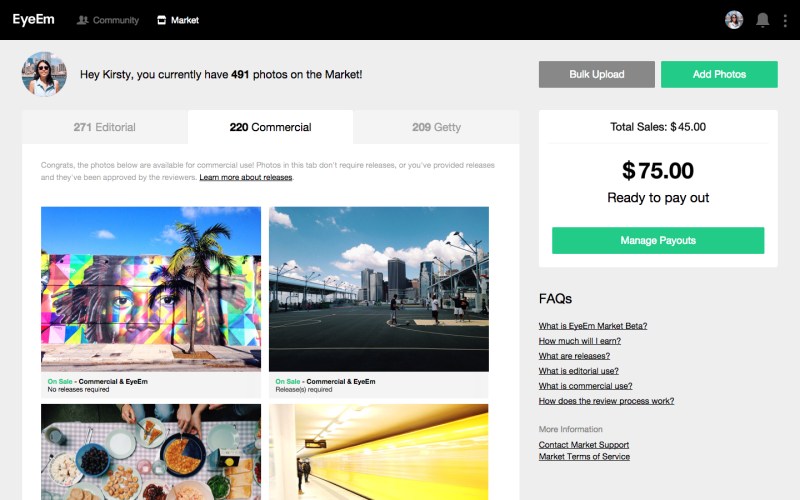 So EyeEm is becoming a stock image platform of sorts, with companies able to search snaps by keyword to use on blogs, magazines, websites, and more. Pricing starts at $20 for a standard license that covers editorial and full commercial use in digital form, while $250 ramps things up to full extended commercial use including print publications with more than 250,000 circulation, TV use, and printing on products. During the closed beta period that kicked off 12 months ago, EyeEm struck a deal to have a gallery of snaps disseminated through stock photo giant Getty Images.

There is a catch in all this, though — EyeEm keeps 50 percent of all proceeds. This doesn’t seem all that great for the creator, especially when juxtaposed against 500px’s 30/70 split weighted in the photographer’s favor.

From today, anyone in the U.S. can buy photos from EyeEm Market, with access opening for U.K. users within a few weeks, followed by other European countries. Anyone anywhere in the world is able to sell their photos.

Note: An earlier version of this article suggested that the 500px 30/70 revenue split was in favor of 500px — it was briefly, but the company made the split in favor of the photographer prior to official launch.