App testing firm Applause has rolled out an update to its mobile-analytics tool, bringing global benchmarking to the mix as well as a new interface and a handful of fresh features.

Formerly known as uTest before a rebrand last year, Applause has developed a different form of app testing, one that taps 175,000 real-world users from 200 countries. By focusing on the post-launch stage of an app, this helps developers squish bugs, improve design, and catch any other issue before it becomes a big deal.

But rather than basing decisions on testing in often contrived environments, Applause Analytics helps developers gather feedback from users “in the wild,” looking at tens of millions of reviews and ratings while pulling in sentiment from social media. Each app is then given an “Applause Score” from 0 to 100 across 10 attributes.

Earlier this year, we reported that Applause was expanding its platform to cover non-English-language markets for the first time, kicking off with France, Italy, Germany, and Spain.

A follow-up to this new internationally focused ethos is global benchmarking, which lets companies see how their apps are performing in different app stores around the world, be it the U.S., U.K., Australia, France, or wherever.

While it was technically possible to “benchmark” internationally before, it was very much a manual process — but tied in with a new interface, Applause now lets you view how your apps are performing in all countries in a single table. The layout also makes it easier to compare key countries (rather than all countries). 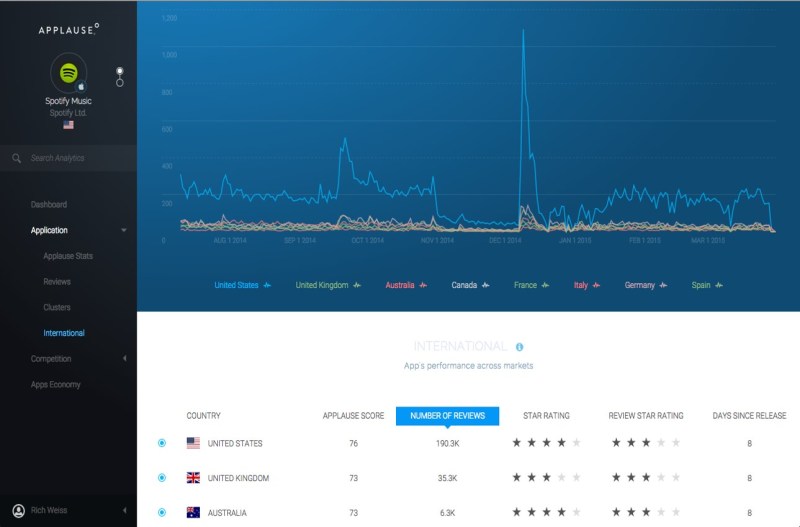 Other new features rolling out today include “competitive benchmarking,” which automatically groups competing apps based on perceived similarities — this way, companies and developers can quickly see how their apps compare with the competition. Elsewhere, Applause also now lets users define custom attributes, so rather than focusing entirely on 10 key attributes, users can now look at scores based only on their selected criteria.