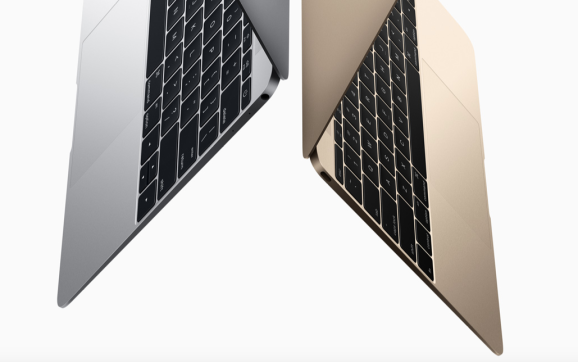 The new Retina MacBook comes in silver and gold, plus "space gray" (not pictured).

Apple’s vision of the laptop of the future — the super-slim 12-inch Macbook — went on sale both in Apple Stores and online Friday.

Media and analysts have been either marveling or scratching their heads at Apple’s minimalist new laptop since it was announced at a splashy Apple event March 9. In fact, it was the new MacBook that stole the show at the event, which was arranged to announce the release of the ballyhooed Apple Watch.

The machine looks like a sleek metal wedge with one little hole in it (the new USB-C port). It represents the MacBook line invading the design and computing power space of the MacBook Air product line. Measuring just 13.1 mm at its thickest point, the new MacBook design is 24 percent thinner than the 11-inch MacBook Air. Some have wondered about the fate of the Air now that the new MacBook exists.

Almost no tech devices use the USB-C port — not yet, anyway. On the Macbook it’s used for power, video, and data. Most users will need to buy a dongle if they want to power the computer and use an external monitor at the same time.

It’s a beautiful piece of gear to be sure, but not a powerful one. The new MacBook is powered by an Intel Broadwell (Core M) chip that’s normally used in mobile devices like tablets.

And there isn’t a lot of storage space in the machine. It seems to be built for people who work with and consume content in the cloud.

Indeed, the new MacBook seems to be an artful exercise in stripping features from, not adding features to, the MacBook. But as one smart commentator said, Apple seems to have an uncanny way of predicting the features that we won’t need a few years down the line.

Here are the specs:

The new MacBook’s high-resolution Retina display is similar to those found on iPhones, iPads, and some MacBook Pros and iMacs.

Apple claims that the new device “is the world’s most energy-efficient notebook.” The engineers were able to reduce the size of the circuit board to one-third the size of the one in the last generation of MacBooks. This created more room for several “terraces” of flat batteries inside the computer.

For those who love minimalist design, and aren’t planning on doing any heavy processing like Photoshop or sound recording, the new MacBook may be a good fit.