American businesses will start hearing today about another option for social curation.

Stackla, founded in Sydney, Australia three years ago, is now launching in the U.S. market, with new headquarters in San Francisco and an office in New York. The company, fueled by a seed round of $2 million from Australian investors, has also established an office in London. The 400 clients it has already acquired include such household names as Target, Red Bull, McDonald’s, and Vogue.

As with other such tools, Stackla enables a marketer to find brand-related social posts through a search of hashtags, locations, or other selectors.

Marketers then select, group, and showcase user-generated content for “social hub” webpages or screens in physical stores or event venues. Such brand-related posts are highly valued in an age when many consumers are wary of marketer-created ads. Companies can also use Stackla to conduct competitions for the best posts around a given theme.

As a content producer for Australian-rules football, CEO and cofounder Damien Mahoney told me, he couldn’t find the right kind of social aggregation tool in 2011, so his team developed its own.

But now marketers have more than a few choices. Fliptu just emerged from its origins in the Los Angeles music business. Others include Postano, Chute, Tint, Livefyre, and Wayin, along with social curation in larger platforms like Spredfast.

Mahoney points to a couple of differentiators. One is Stackla’s “full open API,” which enables it to act as a kind of peripheral tool for other platforms, like the WordPress content management system. It can make social-trend data available when it’s integrated into a customer-relationship management system like Salesforce.

The company is also announcing its plugin integration with Hootsuite today, enabling users to control Stackla from within that highly popular social listening/management platform. At least one other tool in the Hootsuite app marketplace, OfferPop, has some similar functions, but Stackla hopes to build on its successes in Europe and Down Under. 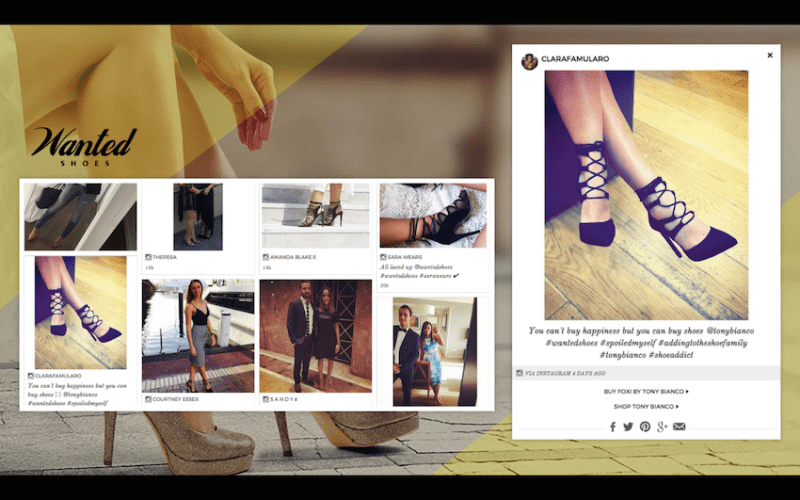 There’s also a Stackla feature called ShopSpots for linking products in a posted photo — such as from a social network or a staged shot — directly to online purchase. The Australian fashion footwear retailer Wanted Shoes, for instance, employed that capability so customers could detect the existence of such a link by hovering over the shoes in a photo.