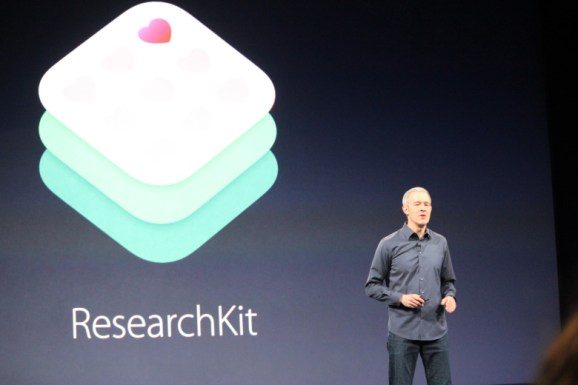 Apple has released its ResearchKit software, which will enable medical and health researchers to tap the power of mobile devices to gather scientific data. The software turns the iPhone into a powerful tool for research.

Apple announced the initiative back in March as a way to expedite research studies. The platform enables medical researchers to easily access the massive amounts of data being collected from health devices and apps by Apple’s HealthKit platform.

The problem with medical research is not having enough data, or the right types of data, or the right frequency of data, according to a presentation by Jeff Williams, senior vice president of worldwide operations at Apple, at an Apple event in March.

Apple said that the new platform is available as open source, so anybody can add data to it and create apps.

The first research apps developed using ResearchKit study asthma, breast cancer, cardiovascular disease, diabetes, and Parkinson’s disease. They have enrolled over 60,000 iPhone users in just the first few weeks of being available on the App Store.

Starting today, medical researchers all over the world will be able to use ResearchKit to develop their own apps, and developers can also contribute new research modules to the open source framework.

“We are delighted and encouraged by the response to ResearchKit from the medical and research community and the participants contributing to medical research. Studies that historically attracted a few hundred participants are now attracting participants in the tens of thousands,” said Williams, in a statement today. “Medical researchers all over the world are actively exploring how ResearchKit can help them study even more diseases, and we believe the impact on global understanding of health and wellness will be profound.”

Apple said the open source framework allows any medical researcher to take advantage of the initial modules in ResearchKit to study health and wellness and better understand disease. Developers can also build new modules based on the open source code and contribute them to ResearchKit. The initial customizable modules address the most common elements found in research studies: participant consent, surveys, and active tasks.

With participant consent, researchers can access a visual electronic consent template that can be customized for a given study and obtain participant agreements. This makes it easy for a researcher to explain a study and even create a quiz that confirms the participant’s understanding.

ResearchKit also has a survey module with a prebuilt user interface that makes it easy to come up with questions for participants. Its active task module enables researchers to gather more targeted data for their study by inviting participants to perform activities that generate data using an iPhone’s sensors.

“ResearchKit could help us reach people all over the world who are willing to contribute to medical research, but might not know how or be able to get involved,” said Ricky Bloomfield, director of mobile technology strategy and assistant professor in Internal Medicine and Pediatrics at Duke University, in a statement. “Our team of researchers is now launching the development of an exciting new study using the ResearchKit framework, which will enable us to gather data quickly, from more participants than we are typically able to reach.”

In an email, Corey Bridges, chief executive of LifeMap Solutions, the developer of the Asthma Health app for ResearchKit, said, “I believe that in a few years people will look back and recognize today as an inflection point. Apple’s open-sourcing ResearchKit is going to lead to an acceleration of learning in medical science, matching the pace of other digitally supercharged industries like media distribution and retailing. We believe so strongly in this that LifeMap is continuing to work with Mount Sinai on additional ResearchKit-enabled apps.”