The Internet of Things (IoT), or the connection of smart everyday objects, has become a huge potential market. But it’s not going to go anywhere without good connectivity. And that’s what Imagination Technologies is addressing with its new line of Ensigma Whisper radio chips.

These components for chips, dubbed radio processing units, are important because they could enable much longer battery life for Internet of Things devices. For instance, if an earlier product had a battery life of a month, the Ensigma-enabled product could have a battery life of four months, said Chakra Parvathaneni, vice president of Ensigma Business Operations at Imagination Technologies, in an interview with VentureBeat.

“What we bring to the table now is a newer set of intellectual property for IoT market,” said Parvathaneni. “These are low power Wi-Fi, Bluetooth Smart, or a combination of those two standards. It’s important to have an engine that can support multiple standards.”

London-based Imagination Technologies makes power-efficient Mips processors and PowerVR cores. But it is also branching out into the IoT with its Ensigma technology. The company’s new Whisper cores can handle communications processing — such as Bluetooth and Wi-Fi — in a chip. These cores can be integrated into a larger system-on-chip design that would power an Internet of Things gadget, such as a smart thermostat. The Ensigma designs feature the industry’s lowest power consumption for connectivity for wearables and IoT, Parvathaneni said. 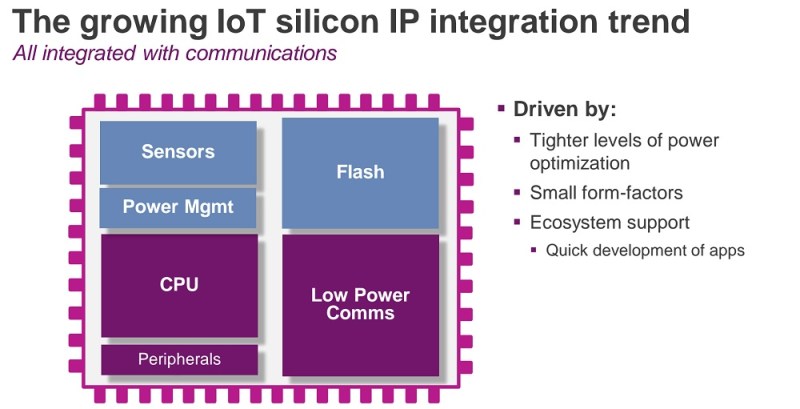 Many of the IoT devices will be deployed in the field where it won’t be easy to replace batteries, so it’s important to keep them operating for as long as possible on a single battery charge. With the new Ensigma Whisper RPUs, customers can integrate 802.11n Wi-Fi, Bluetooth 4.0, or a combination of the two standards.

Putting those components on an SoC is important because it saves a lot on communications time and power usage. While other connectivity chips may be repurposed for IoT, Imagination believes that the communications components are better designed from the ground up for IoT.

The applications include smartwatches, home automation, health care, automotive, industrial, and beyond. The Ensigma Whisper RPUs are available for licensing now.

Takeshi Niwa, analyst at TSR (Techno Systems Research), said in a statement, “In today’s connected devices, we see a clear move away from using separate wireless combo chips toward integrating connectivity onto the main application processor as companies look to reduce power, footprint and bill-of-materials. We are seeing this move first in smartphones, where we believe 70 percent of devices will have connectivity integrated in the processor by 2018. As wearable and IoT devices become mainstream, we believe the same trend will occur.”

Numerous designs are in the works, Imagination said.

Philip Solis, research director at ABI Research, said in an email, “Imagination is doing two things that are useful to the IoT space. They are selling Wi-Fi and Bluetooth (and combo) intellectual property (IP) so that some companies can design that IP into chipsets integrated with a microcontroller of their own. They are also optimizing the designs for lower power consumption, size, and cost by using a less powerful baseband processor, for example — one that would not be good for streaming video, but would be more than adequate for the needs of many IoT devices.”