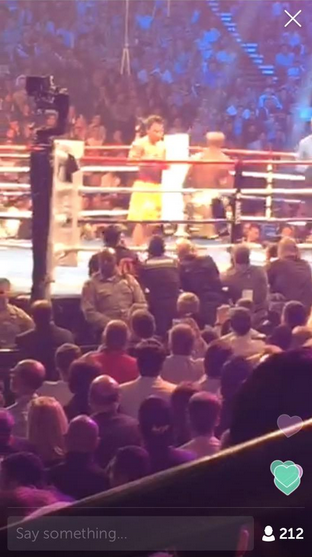 One of the promoters of the boring yet hugely profitable Floyd Mayweather-Manny Pacquiao “fight of the century” is butt-hurt today because illegal free streams of the fight on Twitter’s Periscope app prevented the taking of even more profits.

Some people who had purchased the fight on pay-per-view used the Periscope mobile app to shoot the bout on their TV and stream it live. ESPN reports that as many as 10,000 users tuned into some of the Periscope streams.

This didn’t go unnoticed by the fight’s promoters. Top Rank, which puts on Pacquiao’s fights, spoke through its president Todd DuBoef in an Los Angeles Times interview over the weekend:

“We’ll have to pursue any people who are allowing people to distribute something that is behind a proprietary wall,” DuBoef said. “We’ll have to challenge those technology companies that are facilitating it and we’re going to have to take a legal position against them.”

Twitter said it blocked 30 livestreams of the fight on the Periscope app after receiving reports of 66 illegal feeds. But the streams weren’t hard to find on both Periscope and rival streaming app Meerkat. The video quality of a Periscope feed is necessarily low, but for many it was enough to follow the action without shelling out $100 to watch the fight on TV.

Twitter’s CEO didn’t seem too upset about the issue on fight night:

And the winner is… @periscopeco

DuBoef wants to go after the people who tuned in to the streams, too. “When we start finding out more about it and identify the people who are posting on social media, we’ll know their names and we’ll definitely go after them,” he told the L.A. Times.

While people like DuBoef bemoan the loss of a few more pennies from additional pay-per-view sales, it’s an open question whether or not the cable and IPTV systems serving the fight could have handled any more customers. Demand for the pay-per-view program was so high that parts of the distribution system were overwhelmed, and many customers couldn’t buy the fight due to system outages.

Still, by all accounts, the stakeholders in Saturday night’s fight made out like bandits. The pay-per-view take was almost certainly the biggest in history, with HBO and Showtime raking in more than a combined $400 million on fight night.

The pay-per-view feed sold for a record high price of $90, with some operators charging $100 for the high-definition feed. Verizon has already proclaimed the fight as the largest PPV event ever; the IPTV provider says it sold more than 250,000 feeds of the fight.