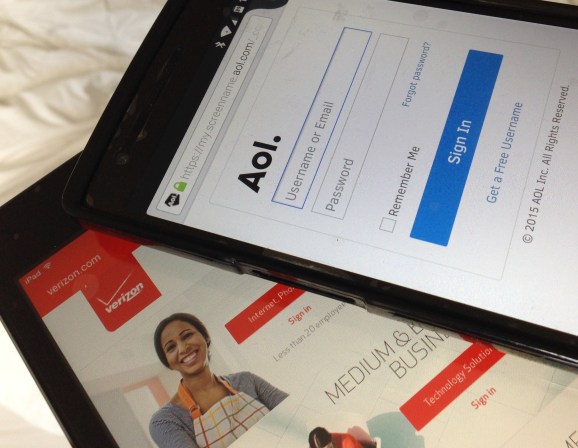 Verizon had been rumored to be circling AOL for an acquisition or joint venture for a while. It now seems a full-on purchase was the preferred option.

Verizon is better known for its broadband and telephone services, but the New York-headquartered company is now pushing ahead with plans to become a content-focused media company, powered by videos and ads.

AOL is one of the oldest brands on the Internet and is synonymous with much of the Web’s early initiatives, including email and instant messaging. It was also the company many people first used to connect to the Internet back in the 1990s. In fact, AOL still offers dial-up Internet access, with two million people still subscribing. But of course, it wasn’t AOL’s dawdling dial-up that helped court Verizon.

Having merged with Time Warner in 2001, AOL was spun out as an independent company again in 2009 and soon revealed a new direction with a focus firmly on digital media, and acquisitions were core to this new business.

AOL’s growth as a media company, with brands such as the Huffington Post, TechCrunch, and Engadget under its wings, as well as its original video content and programmatic advertising technology, will be particularly appealing to Verizon. The latter of these effectively gives Verizon a leg up into the automated buying/selling of ads, which could be lucrative for its own mobile and broadband offerings. AOL Advertising gives third parties access to AOL’s digital advertising tools, while its “Advertising.com” ad network is designed to help advertisers target relevant audiences and thus increase publishing revenue.

“Verizon’s vision is to provide customers with a premium digital experience based on a global multiscreen network platform,” explained Lowell McAdam, Verizon chairman and CEO, in a press release. “This acquisition supports our strategy to provide a cross-screen connection for consumers, creators, and advertisers to deliver that premium customer experience.”

The $4.4 billion cash deal equates to around $50 per share, meaning AOL’s shares shot up by around 17 percent in the wake of the announcement today.

“The combination of Verizon and AOL creates a unique and scaled mobile and OTT media platform for creators, consumers, and advertisers,” said Tim Armstrong, AOL chairman and CEO, who will continue to head up AOL operations. “The visions of Verizon and AOL are shared; the companies have existing successful partnerships, and we are excited to work with the team at Verizon to create the next generation of media through mobile and video.”

Today’s news also puts other suggested “partnerships” to rest once and for all — a Yahoo/AOL merger had been touted for a while, though Armstrong poured cold water on those rumors last year.

While the Verizon deal is yet to be finalized, pending the usual regulatory approvals, AOL will become a wholly owned subsidiary of Verizon when it is finally completed.