Gametime has raised $13 million from Accel Partners and others in a bid to boost its mobile app that lets you purchase last-minute tickets for sports events — without having to print anything.

The funding shows that the category of the “economy of now” or the “moments economy” is a hot one. Gametime is one more in a bunch of hot companies in this category such as HotelTonight, Uber, and Lyft. Gametime is like HotelTonight for sports tickets, which is a $14 billion market. 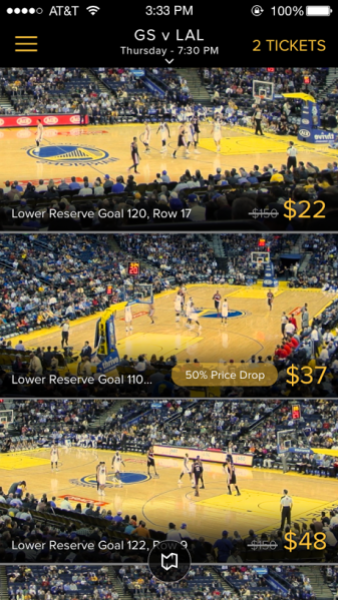 San Francisco-based Gametime has created Android and iOS apps that make it easier to purchase last-minute tickets using your mobile device. It competes with big companies like Ticketmaster and StubHub, but Gametime believes it has an advantage because it can reach spontaneous fans who turn to their mobile devices for a quick solution when they want to see a live game.

Gametime’s latest version has a real-time “pull-to-refresh” feature that constantly updates the best seats available at a sports event. That means fans won’t have to keep reloading a screen to see if someone has bought a ticket in the meantime. In the first quarter of 2015, Gametime’s ticket sales were up 600 percent compared to a year earlier.

“We give people the best options, weeding out the seats that you don’t want,” Brad Griffith, chief executive of Gametime, told VentureBeat in an interview. “We made it very easy to check out and do the transaction. People like how we designed it from the ground up for mobile. And there’s zero printing. That’s how we capture the imagination of the last-minute customer.”

The ticket inventory is never more than a second out of date, he said.

“We had one customer buy eight Giants tickets 45 minutes after a game had started,” Griffith said. “We found a real need in the marketplace for people who are spontaneous.”

Griffith got the idea for the company a while ago when he and his brother were trying to buy last-minute tickets for a San Francisco Giants game. They were at a bar and realized they had to print the tickets. They talked to the bartender and got permission to go to the office and print the tickets. They accidentally printed in color, and it took extra time, even though all they really needed was a barcode or QR code. They arrived late to the ballpark. To solve the problem, they decided to create an app, and Griffith founded Gametime in 2012.

When you try to buy a ticket at a participating venue, Gametime will make some calculations and surface the 50 best tickets that people are selling. It takes into account the price of the ticket and the quality of the view from the seat. By automating this process, the fan no longer has to wade through thousands of tickets for sale and can get an image of the view from the seat before purchasing. Gametime takes a small piece of the overall transaction.

Gametime will use the funds to continue hiring people in all departments, Griffith said. To date, the company has raised $18 million, including a $4 million round led by Accel Partners announced in September.

“Mobile commerce works best at the intersection between real-time and local,” said Brian O’Malley, partner at Accel, in a statement. “Gametime is the first company to reimagine the purchasing and redemption experience in sports ticketing for a truly mobile-native world. Customers are increasingly accustomed to magical experiences in transportation and food delivery. They deserve something exciting here too.”

A recent IAB and InMobi study showed that fans are utilizing mobile (37%) to purchase sports tickets almost as often as the Web (38%) or box office (39%), despite the very brief availability of mobile options. Gametime offers last-minute tickets for 150 teams in 35 markets.

“We compete more with couch, or the bar, or other ways of consuming sports,” Griffith said. “We want people to choose the live experience over the TV experience.”