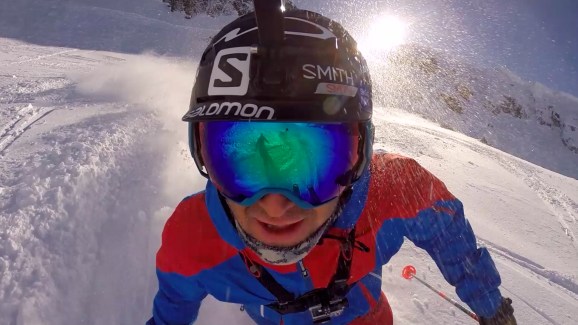 If this sounds familiar, that’s because Microsoft Research first showed off Hyperlapse last August. At the time, Hyperlapse was just a research project, but there were hints it could become commercially available. Now it has.

Traditional timelapses are often created using a static camera. The challenge with doing the same thing using footage from first-person cameras is that it tends to be very shaky and uneven, as the person shooting is usually in motion. Speeding up the video by taking every xth frame, for example, just amplifies all the jerkiness.

Microsoft Research came up with an algorithm that first creates an approximate 3D model of the landscape being filmed, and then identifies the dominant path that the camera took through that landscape. It then stitches together different frames to create a smooth and stable hyperlapse that showcases the essence of the original video. The technology can even recognize and skip over video sections when nothing much is happening, such as when the person shooting the video stops to take a break.

While Microsoft Research was technically first to show off its hyperlapse technology, Facebook’s Instagram beat Microsoft to the punch by releasing its own Hyperlapse app for iOS just a few weeks later. Just like Facebook’s other experimental apps, however, it received a lot of hype at the start (no pun intended), and then was quickly forgotten about.

Microsoft has yet to release an iOS version, while Instagram doesn’t yet have apps for Android or Windows. Microsoft’s solution is much more powerful — but then again, the company doesn’t have a social network to help the creations go viral. The good news is that this competition should lead to some great tools for video lovers everywhere.