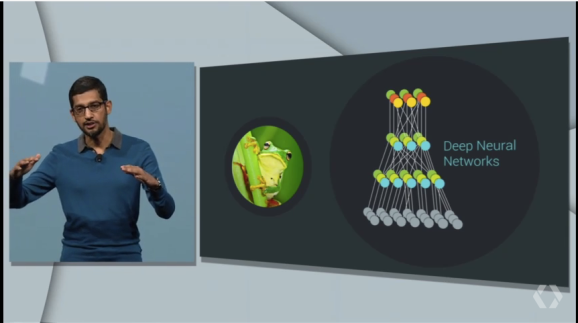 Google's Sundar Pichai talks about its advancements in deep learning at the 2015 Google I/O conference in San Francisco on May 28.

Google today announced its advancements in deep learning, a type of artificial intelligence, for key processes like image recognition and speech recognition.

When it comes to accurately recognizing words in speech, Google now has just an 8 percent error rate. Compare that to 23 percent in 2013, Sundar Pichai, senior vice president of Android, Chrome, and Apps at Google, said at the company’s annual I/O developer conference in San Francisco.

Pichai boasted, “We have the best investments in machine learning over the past many years.” Indeed, Google has acquired several deep learning companies over the years, including DeepMind, DNNresearch, and Jetpac.

Deep learning involves ingesting lots of data to train systems called neural networks, and then feeding new data to those systems and receiving predictions in response.

Google uses deep learning across many types of services, including object recognition in YouTube videos and even optimization of its vast data centers.

Meanwhile, Baidu, Facebook, and Microsoft are also beefing up their deep learning capabilities. Earlier-stage companies like Flipboard, Pinterest, and Snapchat have also been doing research in the area — but none have the computing power that Google does. So Google’s achievements in real production apps are a pretty big deal.