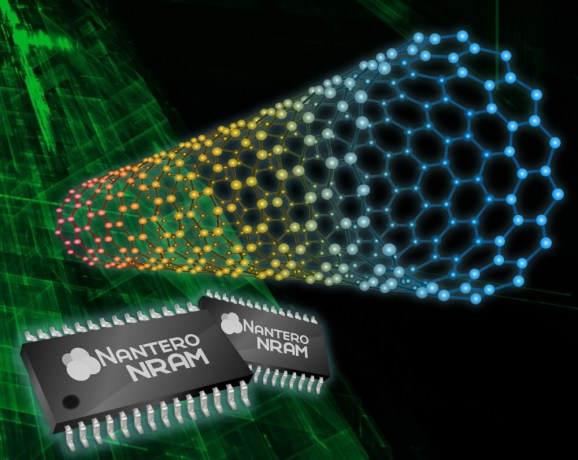 Nantero's NRAM chip is made from carbon nanotubes.

Alternative memory chip designer Nantero has raised $31.5 million in a fifth round of funding for its carbon nanotube technology. The funding is a rare investment in a semiconductor company in an industry dominated by giant corporations.

The chips based on this super-fast and dense technology can be used in a wide array of markets such as mobile computing, wearables, consumer electronics, space and military applications, enterprise systems, automobiles, the Internet of Things, and industrial markets. They could be used to replace flash memory or dynamic random access memory. In the future, Nantero expects to be able to store terabits of data on a single memory chip, enabling that chip to store hundreds of movies on a mobile device, or millions of songs.

They also have thermal and electrical conductivity properties that are better than any other material, Nantero said. The NRAM chips are low-cost, and their components can be stacked. They can read or write data about 100 times faster than NAND flash memory, and at about the same speed as dynamic random access memory (DRAM), the mainstay storage for gadgets while the power is turned on. They can be built in traditional chip factories, and can be miniaturized below five nanometers (the length between circuits). The company also said they use very little power, have high reliability, and have high endurance.

The challenge for making a new kind of memory is always in mass production. Nantero said it has reduced the cost of carbon nanotubes per chip by 10 times in the last two years. It has made tens of thousands of chips to date.

Nantero has more than 50 employees at its headquarters in Woburn, Massachusetts, and it has offices in Silicon Valley and Japan. The company was founded in 2001. It spun out its government business to defense contractor Lockheed Martin in 2008, and it has more than 175 U.S. patents issued and 200 pending.

Greg Schmergel, cofounder, is president and chief executive, while cofounder Tom Rueckes is chief technology officer. George Scalise, former president of the Semiconductor Industry Association, is on its board of advisors.

Nantero said that its NRAM chips have been in mass production in complementary metal oxide semiconductor fabs (chip factories) for many years, and the NRAM process has been installed in seven such factories. It has created sample 4-megabit memory chips that customers are now looking at. It has agreements with multiple top-three semiconductor companies.

Above: How Nantero memory chips work.

Nantero cofounder Schmergel said in a statement that the technology is already under development in world-class factories, and more than a dozen major corporate sponsors are actively working on NRAM. In the next stage, he said Nantero’s chips will enter volume production.

Alan Niebel, a memory chip analyst at and founder of WebFeet Research, said that the technology “has the potential to change the future of electronics.”