That Bluetooth tracker you bought last year is pretty nifty. Misplaced your keys at home? Just ping them! Forgot where you stored that emergency flashlight (don’t laugh, that totally happens)? Let your phone guide you to it. Your dog pulled a fast one and is now running around the neighborhood? Well, that’s not so easy.

It’s the Achilles’ heel for all of these trackers: Bluetooth’s maximum effective range is about 300 feet — and that’s under optimal conditions. So unless your tracker is nearby, possibly even within eyesight, the corresponding app on your smartphone or tablet won’t be able to detect it.

Products like the Tile, TrackR, and Chipolo try to get around this limitation by leveraging the so-called network effect. The idea is that everyone who owns one of these devices becomes another node in an ever-increasing network that can sense and report on the location of a tracker. It’s a great idea in theory, but in practice, it falls way short of the mark, because it suffers from two major drawbacks, which we outlined in our review of the Tile. 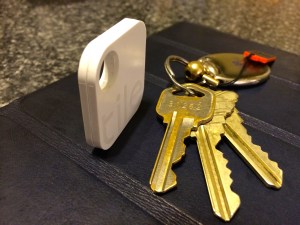 Above: The Tile, seen beside a set of typical house keys.

First, each of the apps offered by the tracker companies is proprietary. In other words, the Tile app can only track Tiles. So the network effect is only as good as the number of users each company can attract. Second — and this is the really big problem — these apps only create the desired network when they are open and running in the background. If you’re not currently curious about the whereabouts of your tracker, what reason do you have to open your app, much less leave it running in the background while it slowly nibbles away at your battery life?

Michael McCormick, a Colorado-based Oracle developer and founder of Thinking Source, saw an opportunity to address both of these flaws. His solution: Locus Pocus, a free app and a community built around the notion that not only should the network effect encompass all Bluetooth trackers, but that even smartphone users who don’t own trackers ought to be provided an incentive to keep the app open and running.

“Some apps have a virtual leash technology,” said McCormick, referring to the proximity alarm that can be engaged when a tracker strays too far from your phone, “but I wanted to provide additional incentive for people to open the app. That’s where I came up with this idea of a finder’s fee.”

Tracking all the things 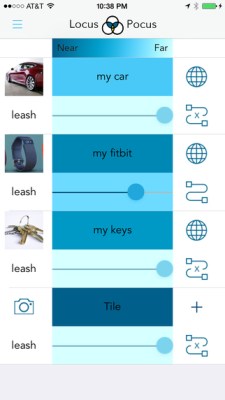 Above: A list of possible items you could track with Locus Pocus. Photo courtesy of Thinking Source.

Under McCormick’s model, Locus Pocus takes a hardware-agnostic view of Bluetooth trackers — it can track almost all of them — and provides a mechanism for owners of lost objects to pay for the most recent location information. This “nominal” fee, as McCormick describes it, passes from the owner to the finder via Locus Pocus, which naturally takes a cut. In so doing, the app effectively monetizes a relationship that would otherwise be free if the owner and finder were both using a proprietary app.

Here’s how it works:

From there, you simply bring your trackers within a few feet of your phone and, once they’re detected, register them with the service with a tap. You can optionally add a photo of the item the tracker is attached to, just like in app provided with your tracker.

The app displays a meter with each tracker in your list that shows its proximity via a blue gradient strip. The darker the blue, the closer the tracker. The strip will turn yellow when the object is out of range. You can also set up an adjustable virtual leash, which notifies you when you’ve wandered too far from the tracked item. 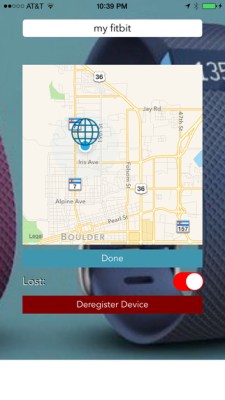 Above: Locus Pocus shows you the last known location of your item, just like proprietary apps do. Photo courtesy of Thinking Source.

To tap into the Locus Pocus network, you indicate that you want location information by switching the item’s status to “lost.” You’ll be notified every time someone in the network has “seen” your item and at that point — like a private eye working with an informant — you have the option to pay for the intel. Each location will cost you $4.99 as an in-app purchase, and half of that fee goes to the finder.

Currently, the age of that intel (and thus its value) isn’t provided prior to buying, but McCormick said that will be added to a future update. Technically, the moment you register a tracker with the service, a record is kept of its most recent location and who saw it. By tagging the item as lost, you’re simply asking Locus Pocus to let you know when that happens.

After we spoke, McCormick decided to implement a new Community mode within the app, which lets users opt to run the app without being signed in. They’ll still act as a node in the network, but any finds they facilitate will be bounty-less. That altruism gets paid forward: Community mode finds won’t cost device owners any money to see.

All your trackers belong to us 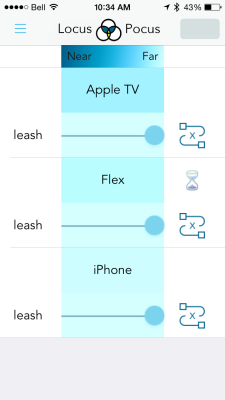 Above: You may be surprised by the items Locus Pocus can track, such as phones and set-top boxes. Photo by Simon Cohen.

You may be wondering how Locus Pocus is able to track devices that it had nothing to do with building. The answer is both simple and a little scary.

It turns out that all Bluetooth trackers possess some form of publicly visible unique ID, meaning that any Bluetooth scanning software can see them if it knows what to look for. But it’s not just trackers. Fitbits, for example, though not intended for use as tracking devices, also emit a readable unique ID.

Which leads us to the scary part. There’s nothing stopping me, as a Locus Pocus user, from adding your Fitbit to my tracked list of objects. The only difference is that every time you sync your Fitbit with its proprietary app, I would need to re-register it with Locus Pocus. Apart from that limitation, any trackable object can be tracked by anyone. The privacy implications are disturbing.

As Locus Pocus grows, so does the sheer size of its tracked-object database. At the moment, the app can track Tiles, Chipolos, XY Find Its, and Fitbits, but McCormick is adding new devices as quickly as he can figure out how to ID them.

When asked how Locus Pocus will keep that same information from prying eyes, McCormick provided an answer we’re getting used to hearing: His app uses the Parse cloud platform, which counts eBay and the White House among its clients. If Parse’s security (which McCormick describes as “tried and true”) is good enough for those guys, the logic goes, it should be good enough for Locus Pocus. Let’s hope that’s not a case of famous last words. 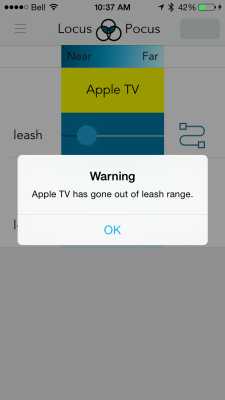 Above: Oh no! I’ve strayed too far from my Apple TV! Photo by Simon Cohen.

McCormick is not entirely sure how to monetize the value of his still-tiny data set yet, but he’s willing to bet it will be of value to someone. Fitbit, he thinks, might be happy to pay for ongoing reports of where its products are being used. But that’s assuming it doesn’t already track that data, which seems unlikely considering it has access to a phone’s location services through their app too. On the other hand, if McCormick can add other activity devices to his lost-and-found collection, maybe Fitbit would pay for that competitive data.

McCormick’s ideal version of the future would have Locus Pocus as the de facto location platform for all trackable devices. Should that happen, the app would be able to interact with — not just track — these gadgets, opening up the possibility of making them ping, as you can currently do through the proprietary apps.

But what could give these disparate companies an incentive to come together under the Locus Pocus umbrella? McCormick thinks it comes down to dollars and cents. “Hardware is a commodity item,” McCormick noted. (“Unless you’re Apple,” he adds with a smirk.) “How are they paying for their cloud? With downward pressure on the price of their trackers, I don’t see how they can sustain that. They need to outsource.”

They may indeed. As McCormick rightly pointed out, each of these makers must pay for their cloud platforms — something that likely isn’t cheap and will probably grow as their user base grows. Given that none of the manufacturers currently charge for their location services, it’s not clear how they’ll recoup these costs. Only Tile has a recurring revenue model, but it’s a questionable one: Without a replaceable battery, Tiles must be purchased anew annually, something the other trackers don’t require. “My hope is that they see the value in this,” McCormick said.

If Locus Pocus is successful in providing the needed incentive for users to keep the app open, it automatically creates value for the tracker manufacturing companies. They could duplicate Locus Pocus’s formula, but why keep your Tile app open and only receive bounties for that community, when you could keep Locus Pocus open and collect bounties for all of them?

Will Locus Pocus succeed? I don’t see why not. McCormick’s biggest challenge is simply getting the word out. If that works, he’s on his way to amassing a serious amount of location data, and possibly some decent cash too. Want him to show you your keys?

Show him the money.