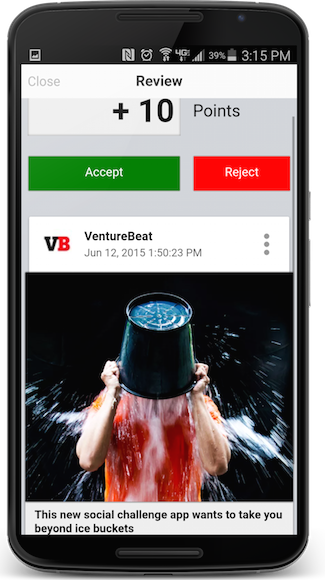 Facebook has aggravated the hell out of marketers by tightening its News Feed algorithm so much that posts get through to relatively few of your fans — unless you pay for boosts.

A new social network called Minds wants to change that by letting users earn points and then trade those points to boost their posts.

The New York City-based company is today launching the beta of its web version, which had been out in alpha since 2012, and issuing the betas of its iOS and Android apps. The network claims about 30,000 users currently.

For CEO and founder Bill Ottman, the point-earning/exchange system is not the only way Minds puts users’ interests first. The network, he said, is transparent but hidden — that is, built as open source code that can be examined by anyone, with all messaging encrypted.

Users earn points by doing things on the network — uploading, voting, referring, posting, or commenting about content. Users vote on whether they like content or not by swiping, with the most-liked content driven to the top of charts.

You can post content to your entire Channel, which is Minds’ term for your fans. To post outside your Channel, you need to use points, like offering 10 of your points to another user for 10 views of your post on their Channel. Points can be also be exchanged with Minds for site-wide sharing.

Currently, one point gets you one view by someone. Ottman told me that will change, as a supply-and-demand market — “similar to Uber’s surge pricing” — will automatically determine point valuation.

If you want extra points, Minds will make money from selling them. Although it currently shows Google AdSense ads and Taboola’s content marketing, Ottman said those will soon go away. Point-selling will be the main revenue source.

By the end of the year, when a release version is planned, the company said it will license a white label version of the network. It will also allow external websites to show posts for which users have paid for points to boost, sharing the revenue with the sites and driving outside traffic in.