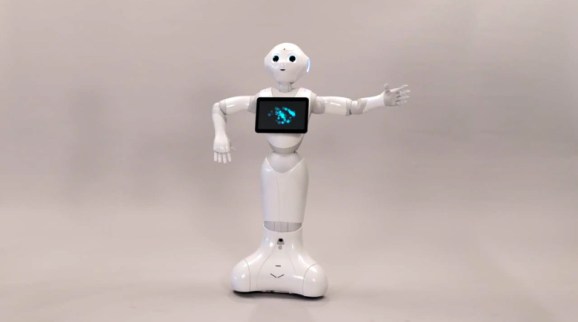 Japanese telecom giant SoftBank has announced that its “emotionally intelligent” robot will go on sale from June 20.

The launch will be limited to a mere 1,000 units initially, and sales will be restricted to Japan. However, news also emerged today that Alibaba and Foxconn will each invest 14.5 billion Japanese yen (a little more than $236 million combined) in SoftBank’s robotics arm — SoftBank Robotics Holdings (SBRH).

This deal will see Alibaba and Foxconn each take a 20 percent stake in SBRH, and the triumvirate will “build a structure to bring Pepper and other robotics businesses to global markets.” No timescale is given for the wider rollout.

“These emotion functions in Pepper are modeled on the human release of hormones in response to stimuli absorbed by the five senses which in turn generate emotions,” the SoftBank statement read. “In addition to Pepper’s emotion recognition functions, Pepper has capabilities to generate emotions autonomously by processing information from his cameras, touch sensors, accelerometer and other sensors within his ‘endocrine-type multi-layer neural network’.”

The monthly subscription includes a cloud-based AI service that uses SoftBank’s network to gather data and enables the robots to “learn” from each other over time.

So while the full fees make the product too expensive for the average consumer, the $1,600 base rate — if or when the robot becomes available to the end consumer — should make it affordable to many more people.

Robots have been a mainstay of science fiction for a long time, but with advances in technology there has been an increased focus in recent years. Not only is Google ramping up its robotics investments — including full-on acquisitions — but it’s working to bring driverless cars to our roads. Elsewhere, Jibo closed a $25 million funding round earlier this year for a personal robot that’s like a cross between a tablet and a puppy.

Later this year, SoftBank says it plans to launch an enterprise-focused version called “Pepper for Biz,” with more details to come at the SoftBank World 2015 conference next month.