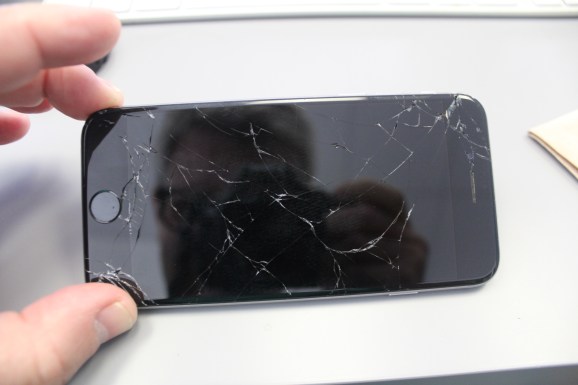 It finally happened. I became one of the many people who have shattered the screen on their iPhone 6, a phone I really like.

I was crossing the street to get in an Uber, carrying some baggage in one hand and my iPhone in the other. The phone slipped from my grip and landed perfectly flat on its face on the cement.

I stood there staring at it laying facedown in the street. Then I picked it up to see the webwork of tiny crack lines all across its front.

Then I just laughed. What else can you do? It’ll cost me upwards of $150 to get the screen fixed.

My complaint is that it didn’t need to happen. I’ve dropped my iPhone many times, and the marks on the edges and corners are there to prove it.

SquareTrade, which sells protection plans for phones and other devices, did a series of drop tests and found that the iPhone 6 was the most durable phone it had tested — when dropped on its edges.

I knew it was just a matter of time before I dropped my iPhone on its face and broke the glass.

Drops happen way too often because the metal used on the phone is way too smooth, slippery — droppable.

I talked to the people at iCracked, a network of repair centers that fix many kinds of smartphones, about iPhone 6 break rates. “We don’t release exact numbers based on device, but we can tell you that the number of repairs we’ve done on iPhone 6 and iPhone 6+ is higher than any other phone on the market,” a spokesperson said in an email to VentureBeat.

“Based on what we see in the field from our 2500+ iTechs, [iPhone] 6 models are being broken at a faster rate (dominated by screen repair more than any other type of damage),” she wrote.

iCracked believes more drops are happening with the iPhone 6 because of its larger size relative to earlier iPhones, which can make it awkward for smaller hands to hold. But I would wager that it’s attributable to the larger size and the slippery surface material.

Apple could easily put some rougher sections of more grippable metal on the phone, and the looks of the device would suffer barely at all. Drops would go down significantly.

I know. I know. Why don’t I put a case around the phone. Sure I could do that. But I shouldn’t need to ruggedize my phone. I’m not an engineer on an oil well or something — I’m just a normal, everyday working urbanite.

And if we’re expected to immediately slap some third-party case on our new iPhone, why did Apple spend so much time on its design, and why did I shell out so much lettuce to for it?