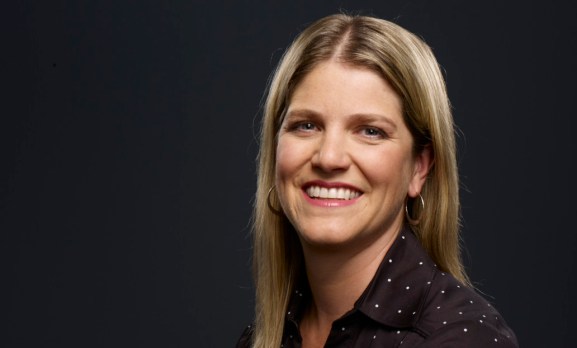 Jen Grant is the new CMO of Looker.

Jen Grant has joined Looker as its chief marketing officer. She was formerly a vice president of marketing at Box and a CMO at Elasticsearch. 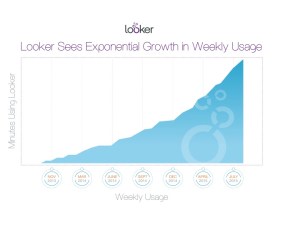 Above: Looker’s graph illustrates growth in usage of its platform.

Looker may not be one of the big names in data analytics — yet — but the company has impressive growth. Its revenue has risen fivefold in the past year, the company told VentureBeat, although it didn’t share specific numbers. That’s up from 400 percent annual growth just three and a half months ago. It has also seen an impressive-looking surge in the usage of its platform, as shown in the graph to the right (note, however, that the Y axis is unlabeled, so the magnitude of that growth is unclear). Customers include Yahoo!, Warby Parker, Gilt, and Sony; in the past quarter the company has signed on Autodesk, Birchbox, Harvard Business Review, and Relay Networks.

Looker provides a connection layer between data sources and the employees who need to make charts, reports, and graphs from that data. In most cases those are data scientists or data analysts, but the company is increasingly targeting marketing professionals who are not data experts. In that, it competes with an array of data-analysis and business-intelligence (BI) companies, including GoodData, Domo, Microstrategy, IBM Cognos, and visualization tools Tableau and Qlik.

The Santa Cruz, California-based company now numbers 140 employees. It announced a $30 million round in March of this year, led by Meritech Capital Partners, and has raised $48 million to date.

Grant spent five years at Box and took the company to its first pre-IPO stage. (The IPO was then delayed, but the company finally went public in January of this year.) She left Box in October 2013 and spent a year at Elasticsearch, helping the enterprise search company rebrand itself and build a marketing team.

We spoke with her last week in an exclusive interview about her new position, what’s next for Looker’s marketing, what it was like to work at Box, how the landscape for enterprise tech has changed in the past few years, and the ways B2B tech marketing is evolving.

VentureBeat: Tell me what convinced you to join Looker.

Jen Grant: What tipped the scales for me was the enthusiasm of their customers. Usually people are very excited in video testimonials and so on. But I spent a week meeting customers face to face, and they are just super enthusiastic. It’s not just, “Hey, it’s a really good product.” It’s, “Oh my God, I love this product. This solved an immense problem for us. We want to tell everyone about it.”

VentureBeat: That’s an enviable place to be for a marketing person.

Grant: Exactly. On the flip side, even though we have these very excited customers and the growth rate and the website and all these things going super well, not that many people know about Looker. For me, that’s perfect. I can bring a lot of value to this product, to these happy customers, just by getting the word out that there is this solution to a problem that many people are struggling with.

VentureBeat: Were you already Santa Cruz-based, or are you moving there to be with the company?

Grant: I am moving to Santa Cruz, yes. It’ll be fun.

It is nice to be a little bit outside of the Valley. When you take one little step outside, it gets you to realize, there’s this whole world of people — in many different states and countries — that don’t necessarily use all the same words we use in Silicon Valley. They’re not talking in acronyms or jargon we use. It’s important, when you focus on making your customers happy, to actually understand your customers. That one little step outside of Silicon Valley helps with that.

VentureBeat: This raises a question. The people who are actually using Looker are a much smaller, more defined audience. They’re data scientists and developers, not the marketing manager or the product manager, right?

Grant: We actually address both.

Part of our product is for data analysts, the data team that has huge databases of any different size, whether it’s MySQL or Redshift or whatever database they might have. They can work with Looker to help enable all of the people in the organization to do it themselves, to have an interface where they can ask any question of their data that they might want to ask.

The reason that’s important is because most of the legacy BI solutions — I’ve been through this experience myself — require that the data team are the only ones who can get the analysis out of the BI pool. People like me have to wait in line. “Can you please get me a report that shows me answers on how my market funnel is doing?” A little while later you get your report and you realize that, oh, what you really want to ask now is this other question. Now you have to go back and wait in line for the next time they have somebody to help me.

Looker allows the data team, instead of spending all this time answering questions for the business team, to give them Looker, and then Looker is the interface all these business people can use. What if I want to know this by week or by year? What if I averaged it between these two different user types? They have the ability to explore the data themselves. There are uses for both business teams and data teams.

VentureBeat: Who’s making the decision to buy Looker, then?

Grant: It depends. Typically what we see is, the data team see the value of Looker so clearly. We’ve had a number of conversations where we show a demo, and before we can even walk out of the room, the head data analyst, whatever their title might be, will say, “When can we start? We should be doing this now. This is critical for my business and will help solve this problem where we’re knee deep in a line of requests.” Typically that’s where we get the most enthusiasm.

But on the flip side, there’s still an opportunity for us to talk to business people, especially in marketing. With many customers, once they get the system out to all the people in their business, there’s an eye-opening experience. I was never able to explore the data like this, I really understand how my business works so much better than I did before, I didn’t even know this was possible.

VentureBeat: Before you went to Box, you did a lot of consumer product work at Google. Why did you decide to shift to enterprise?

Grant: I was working on the consumer side of the apps, but mainly Gmail, because that was our flagship app, obviously. There was a separation between Gmail and the Google apps team. The Google apps team was focusing on business services and we were focused on marketing to consumers.

Box was a perfect melding of a very consumer-feeling brand, but a company that was selling to business. To some extent, when I started at Box nobody knew they were selling to businesses. Most of [the customers] were consumer backup. It was a bit of, well, we have to brand this thing as a business tool, but then we also have to do all the typical B2B marketing. There’s all this super interesting analytics around B2B that’s now — all the new tools you can use to create a machine around it.

VentureBeat: It seems notable that Box had a large number of women executives and a high ratio of women in its staff in general early on. Tell me about that culture.

Grant: It was incredibly important to the culture. In retrospect, I might have taken it for granted a bit. But at one point there were four women on the executive team. It was pretty intense. 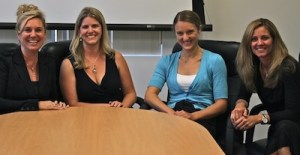 In the early days, Karen Appleton and myself were the first women executives. It helped create a culture that was less of the fraternity that sometimes startups end up being. That made it more inclusive and more diverse. As we started hiring and growing super quickly, we’d already established that people went home to be with their families. We wanted different points of view. We didn’t all need to come from the same school and look the same and think the same.

A diversity of opinions was critically important. We’d really debate things. Sometimes it would look like a heated argument, but in the end we were all getting to a better solution because more ideas were being contributed.

It was a wonderful — I’d call it happenstance, because it wasn’t really by design. It just happened. And then Karen and I both contributed a lot to helping Aaron [Levie] and Dylan [Smith] and the original founders understand what it means to work in a company and how you need to take care of employees and have a nice office that people want to come to, having lunch brought in that gets people together.

VentureBeat: It’s been seven or eight years since you started at Box. How would you say the landscape for enterprise technology has changed in those years?

Grant: On the marketing front, the ability of a marketer to be super data driven is massively different. Back at Google — it’s hard to believe that the idea of marketing automation was sort of like, huh, what’s that, do we need that? What’s this lead scoring thing? Now this is what you need to do when you’re creating a marketing machine.

Certainly on the marketing front, just huge advances in all of the different products and technology you can use to help streamline your marketing. Which is good for everybody. Marketers are more targeted, but it also means people aren’t getting spammed, because marketing is more relevant. We’re targeting emails to what you actually might be interested in, or whatever the medium is that we’re using. To me that’s a notable change.

Overall, when you look at enterprise software, we’re finally at a point where all these things that used to be new are starting to look old again. In the early days of Box, we were working with Salesforce and Netsuite and Success Factors and all of these products that were saying, cloud cloud cloud.

Now we’re at a point where cloud is not really the conversation, which is nice. It’s like, OK, cloud, cool, but what do you actually do? What’s the benefit to me and my organization?

The conversations that a lot of these enterprise vendors are now having with potential buyers are much more about what the software actually does. How does it help your business move forward?

Those companies that are cloud-based, but which are getting old, have to start thinking about how to remain innovative and create products that don’t get disrupted by new ones coming in.

What are the new ones coming in? They’re simpler. We’ve gone from large cloud software that handles a lot of things, and now there’s a lot of these small solutions that are super effective. They don’t solve 10 things. They solve just the one thing.

Take HR for one example. There’s a lot of new HR solutions that are sort of point solutions. But they’re super great. People are adopting them because they’re better than other options. Even if the other options solve 10 more problems, they’ll go with the point solution because it’s cleaner and solves the problem faster.

It’s an interesting wave. We’re back at: What are the new disruptive things?

They’re going after all of the companies we love dearly that started the whole cloud movement. So we’ll see.