Photography marketplace EyeEm has a new update for its mobile apps that it hopes will help its community members find recognition and make connections more easily.

People using the EyeEm app will see an improved Discover feed that will be manually curated by EyeEm editors in an effort to showcase what it says are the “most beautiful images from featured photographers and albums.”

EyeEm is a mobile app that is a photo-sharing app much like Instagram, but instead of constraining pictures in a square, it publishes the full image and also enable people to sell their photos through a community marketplace. It has more than 13 million users and recently raised $18 million from Valar Ventures and others. 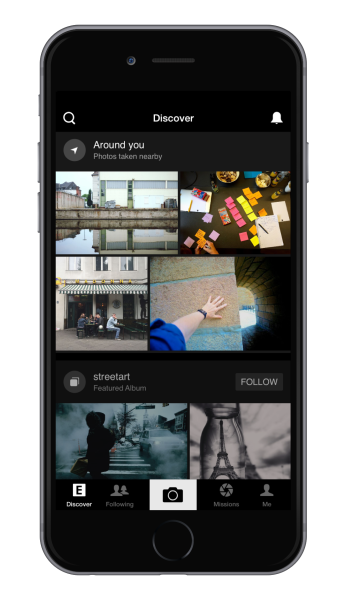 When you log into EyeEm on iOS and Android, the first thing you’ll see is an updated feed. It no longer has a giant map with your location on it, as previous versions did. As it’s a photo-centric app, the new EyeEm rightfully places a lot more emphasis on photos — you already know where you are, so why should the app tell you that information?

The intent, EyeEm says, is to get people’s creative juices going so that they’ll feel inclined to upload their most amazing photos not only to the app, but share them through EyeEm’s Market. That’s a marketplace, which opened up to the public on March 2015, where users can sell their photos easily. It seems to have done quite well in the United States and the United Kingdom, as the company will be expanding to Germany, Switzerland, and the Netherlands starting next week.

So what makes EyeEm’s Discover feed so special? For me, it’s the editorial and algorithmic control it offers. The company says that what the user sees depends on their location and the quality of the content, not “superficial” metrics such as likes and comments. By focusing on these two metrics, EyeEm believes that “unseen talent will emerge.”

There are five full-time members on its editorial team, who produce new content multiple times a day.

The new feed may look like a response to Instagram rolling out its improved Search and Discovery feature last month. But there’s a difference.

Instagram’s Search and Discovery focuses on events and live moments, while EyeEm isn’t focusing on that area. Instead, it’s directing its attention towards the creative people and making it like it’s an art gallery. To that end, EyeEm wants it to help photographers get recognized. One possible scenario is that you might be looking for a photographer in your area who specializes in a certain type of photo so by looking in EyeEm’s Discover feed, it might highlight their work.

Another distinguishing point here is that EyeEm is more akin to the Vimeo of photography, where all the creative artists once published all of their really amazing work.

EyeEm is connecting the creatives together and has really fostered a community thanks to not only spotlighting great photographers, but also giving people the tools to better understand and improve their own skills — I may see a picture from a professional photographer and would want to know what type of processing has been done. Until now, EyeEm showed my that information via its Open Edit feature, but limited it to a small group of people. Today it’s available to everyone. According to Spiering:

The Open Edit Beta has been a great success. We are seeing very high engagement numbers on photos that participated in this program and we are now ready to make it available to everyone. Starting now any photo that is edited with EyeEm’s powerful editing tools is part of Open Edit and users can not only see which filter has been used, but also apply all the edits to images of their own.

To get the new Discovery feed, update the EyeEm app on iOS or Android device.